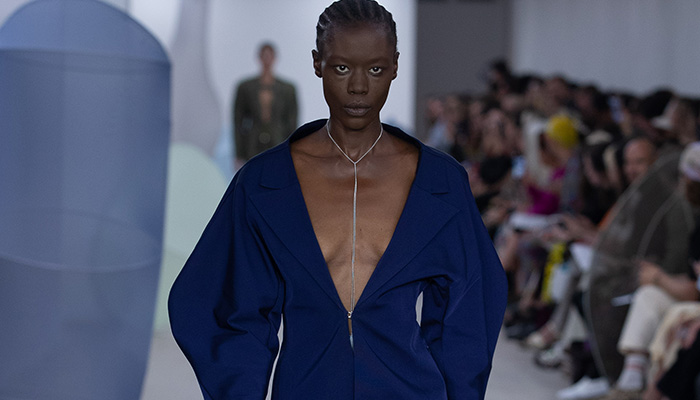 “A new spirit of poignancy and poetry to Malone’s handwriting sees him sculpt and shape something beautiful from the bleak. The intricate illustrated prints visible underneath many of these looks are taken from scraps of paper and old till receipts, across which Richard and Nellie sat together, talked and drew.

The fight, resourcefulness and sense of overcoming which has defined Malone’s career is ever-present. It continues to serve as his nod to the under-represented – in this case specifically, working-class creatives without a seat at the table. Seamstresses, tailors, makers. It’s a conversation he had repeatedly with Nellie in the fast few months they had together – discussing the idea of the working class ‘taking up space’ and of rebellion through directing one’s own narrative. In collaboration with set designer Janina Pedan, an installation of sculpted forms in this afternoon’s show space explore these notions.

In this work, across extraordinary hyper-constructed tailoring, shapes are extended and contorted by recycled wadding. Much of the fit-and-flare suiting seen here integrates Taroni silks from past collections’ production runs; offcuts in abstract shapes are given new life. Archive samples are reconstructed and refurbished, integrating handwoven linen and horsehair canvas into masterful new work which tells the story of Malone’s inherent respect for tailoring. Each piece was tailored and cut by Malone for his cast of female muses. The metalwork seen as jewellery, belts and bag straps was painstakingly made by hand by Malone – originating, literally, as a distraction from excruciating loss.“