Magazine: Asos
Issue: December 2011
Cover Star: Jessica Chastain
Photographer: Alex Sainsbury
Website: www.asos.com
Jessica Chastain becomes ASOS magazine's December cover girl with a shoot by Alex Sainsbury, Jessica who was photographed in in NYC exclusively for the new issue has starred in hit films such as The Help, The Tree of Life, The Debt, and Take Shelter.  The Wettest Country in the World slated for a December release is her next project where she's co-starring Tom Hardy, Shia LaBeouf, Gary Oldman, Guy Pearce and Mia Wasikowska.

For more photos from the corresponding story and a peek into Jessica's interview continue after the jump: On her first red carpet experience:
Brad Pitt on one arm, Sean Penn on the other – “The best accessories I could have asked for to go with that dress (Zac Posen).”

When Madonna presented her with the inaugural Gucci Award for Women in Cinema:
“It’s a little embarrassing to even talk about, because you think, ‘What has happened to my life?!’”

When Vogue named her its latest style crush:
“Vogue? Are you kidding me? I grew up buying Vogue.”

On filming The Help with Emma Stone:
“Filming that was like being at summer camp.  We were all in this small town – Greenwood, Mississippi – so we would work all day, then go and eat because we had to gain weight…It’s really fun because it means you get to eat a lot and you don’t have to worry about working out, but it also means that all of your clothes get too tight…There’s something sensual about being heavier, you feel like a painter’s muse.”

On her new success:
“I’m not in it for the fame or money. A lot of my childhood (outside San Francisco) we were very, very poor.  I’ve experienced that. It’s tough, but I can get through it.  I could be very happy working Off-Broadway in theatre for the rest of my life as long as I was acting – that’s what makes me happy.”

On her day-to-day style:
“I live by the ocean in California, so it’s Chloe sweaters and jackets. I absolutely adore Louis Vuitton…i love the color, there is so much play.  And I love new designers, Juan Carlos Obando and Prabal Gurung.  I always try different things, try to change my look… I can’t wear all things…I could never be a model…What I am is a storyteller, so when I see an amazing dress, I think about the story of the dress and get into character.” 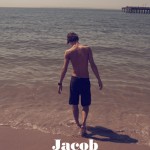 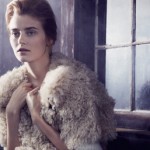