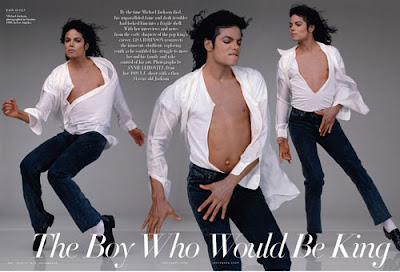 Magazine: Vanity Fair
Published: September 2009
Cover: Farrah Fawcett / Michael Jackson
Photography by Annie Leibovitz and Bruce McBroom
Website: www.vanityfair.com
With the September issue Vanity Fair gives tribute to two modern day legends lost in the same day, Michael Jackson and Farrah Fawcett. Jackson cover includes a photo of the superstar by Annie Leibovitz, with an interview retrospective by contributing editor Lisa Robinson.
In her article “The Boy Who Would Be King,” one of two cover stories in the September 2009 issue, Robinson recounts numerous interviews with Jackson, beginning with their first meeting at his family’s home in Encino, California, in 1972, when Michael was 14.
Farrah's cover was photograped by Bruce McBroom taken in 1976 on the same day she was photographed in her famous red bathing suit.
Subscribers are already randomly receiving the covers, while others can pick up a copy of the September 2009 issue of Vanity Fair, available on newsstands in New York and Los Angeles on August 5 and nationwide on August 11.
*Source | Vanity Fair