American Vogue‘s editor in chief Anna Wintour sits down for an interview with New York Magazine‘s fashion director Amy Larocca discussing fashion, power, being a working mother, and privacy topics among other. For the accompanying photos Anna Wintour was captured by fashion photographer Annie Leibovitz.

Wintour on how she sees the future of print media:
“One of the things that I’ve started is that I ask various CEOs from different companies to come in and talk to the editors-in-chief and the digital directors about where they see media going and for any advice they can give us. About three or four months ago, Eric Schmidt came in and he asked me whether the company still believed in doing Annie Leibovitz–type portfolios, and I said, ‘Well, I think that it’s very important to make the print publications even more luxurious and even more special just to differentiate us from everything else that’s out there.’ Print publications have to be as luxurious an experience as possible. You have to feel it coming off the page. You have to see photographs and pieces that you couldn’t possibly see anywhere else.”

On her favorite cover:
“If I had to pick one, I’d pick my first because it was a leap of faith and it was certainly a big change for Vogue, where, month after month, you had beautiful images but very familiar. I honestly don’t remember who the girl was, but the [Peter] Lindbergh shoot came in and it was just so vibrant and alive and it was just very joyous but it wasn’t perfect. The covers pre­viously had been super-perfect and, you know, I remember people asking me if she was pregnant. And her eyes were a little bit closed. But it just felt very inviting…”

On whether she watches television:
“Oh, Homeland, Game of Thrones, which has just set the bar so high for everybody. I wonder how much one of those episodes costs! The costumes are so good. But I don’t watch Mad Men. I can see that it’s wonderful, but it’s so depressing. Or House of Cards. Everyone is so evil!”

On her relationship with the First Lady:
“It’s been wonderful, from the fashion industry’s point of view, to have a First Lady who’s so supportive of our industry. I think previously, with the excep­tion of Mrs. Kennedy, Washington has been a little wary of fashion and what it means. I think there was a mind-set down there that being interested in clothes and fashion and how you look might equate you with not being a serious person.”

On whether she’ll support Hillary Clinton:
“I hope so! Of course. Yes. But it’s only just started!”

On the issues she’d like to see discussed this election cycle:
“Obviously gay rights, although I feel that’s a case that’s well on the way. It’s incredible how it’s changed in, what, five years? … And I’d like to see more conversations about gun con­trol. … Politically it’s very tricky territory, and obviously the NRA is a very powerful lobby, but I remember a 3- or 4-year-old getting their hands on a gun and shooting their mother and I don’t understand how guns could even be anywhere near a child. It’s just insane.”

On her work supporting young people who suffer from severe anxiety or depression:
“I think mental health is an area where people are embarrassed … They don’t want to talk about it because somehow they feel they’re a failure as a parent or, you know, they’re embarrassed for their child or they want to protect their child, lots of very good reasons, but mental health I feel is something that you have to talk about. That time from 15 to 16 to your mid- to late 20s—you look grown up, people think you’re grown up, but you’re still a kid. … It’s such a barrage of informa­tion coming at them every which way. I’m so grateful for Lena Dunham and Emma Stone, who are out there talking about these issues and making young people realize that they’re not alone and that it should be talked about.”

On sexism in the workplace, when asked if she’d read Lean In:
“I think that maybe the way things operate out in Sili­con Valley is a little different from the way … Maybe we’re very spoiled, Amy, living and working in our industry in New York, because from my personal experience I’ve never felt held back or differentiated against. Maybe I’ve been very lucky … but I really can’t think of a serious incident that I’ve had to deal with on a profes­sional level.”

On being a working mother:
“I think it’s very important for children to understand that women work and that it’s fulfilling and it doesn’t mean that they love you any less or care about you any less. … You make the time! You go to the games and you go to the birthday parties and you’re there for the times that count, but I also think from [Larocca’s] daughters’ perspectives and I hope from my kids’ per­spectives, they saw how rewarding and ful­filling working was. I think it’s important for kids to understand that. I’m sure that it’s equally rewarding and fulfilling for women who chose to stay at home and take care of their kids, but it just wasn’t a choice that I made.”

On whether it was ever difficult:
“Of course there were times, particularly when you travel, when it’s very tough to leave the kids, particularly when they were very young. I would try to take them with me when I could just so they could experi­ence and see a little bit of what a workday involved. … And I’m not trying to be dismissive with this; of course there were times when it was difficult. But it’s the way we all live today and it’s not changing.”

On whether she feels pressure to live up to a certain ideal or sees herself as an icon:
“I don’t think of myself in that way. I get up every morning, Amy, and I, you know, work out, I go to work, I try to do the best job I possibly can, whether it’s for Condé Nast or for the museum or anything else that I might be involved in, but you know, I’m not thinking, I’m an icon.”

On social media:
“Look, social media has changed the way we look at everything, and I think it’s amaz­ing and incredible and fascinating. Obvi­ously, there’s a voyeuristic quality to it, but I also think it’s quite human and it’s a way of sharing and talking and, you know, maybe it’s a little bit less about talking on the phone and more about sharing your life through social media, and I don’t criticize it at all, Amy. I think it’s fascinating and fantastic and wonderful, and I think it’s another way of keeping in touch, and it would be ridicu­lous to not embrace it. It’s just not person­ally something that I choose to do.”

On public misperceptions:
“My dad. And this was way before the internet. He was a brilliant editor, he cared passionately about his work. He adored the theater, he adored tennis, he was a wonderful dad, and I think, because he worked quickly and was decisive and he was sure about what he wanted, he got a nickname. Chilly Charlie. He was the least chilly person that I or that anyone at home knew, but it stuck. It was men­tioned in his obituaries.” 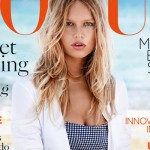 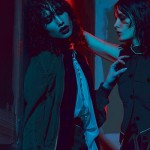