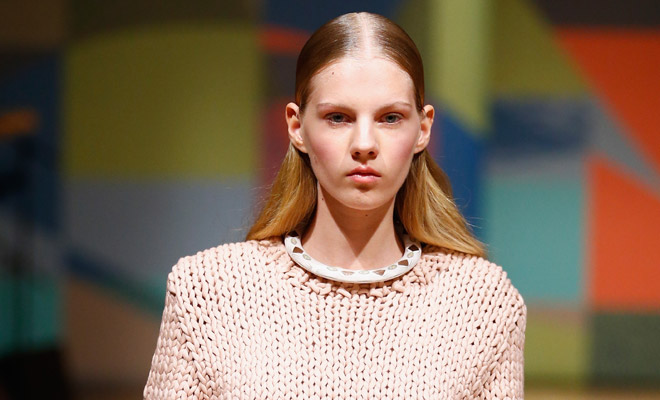 Berlin- based designer Kilian Kerner presented his S/S 2016 collection “Zartbitter- the chemistry between different things” on the 09th of July 2015, the third show day of Mercedes- Benz Fashion Week Berlin. As the title says, the designer focused on a vivid play with contrary elements. Live music by german band LOT underlined the special atmosphere of the show. He creatively played with fabrics and structures and therefore created looks we haven’t seen before. That play gave the looks their contemporary edge. They are made for the modern, cosmopolitan and trendy woman that dares to wear unique looks. Overall we got to see approximately 39 womenswear, and ten menswear looks. The location itself was well- chosen as it contrasted with the collection as well: the highly modern ceiling construction paired with antique herringbone parquett are two contrary elements that build the same unique interaction as the collections’ pieces.

The colour palette was dominated by more restrained, sophisticated hues and so nude, coffee and rosé, but also different shades of white from sheer white to cremé were present. Albeit daring bright hues, for instance yellow-green, tangerine, royal blue, gave the collection its special flair. It was exactly this mix that makes those pieces stay in mind. “Zartbitter- the chemistry between different things” is made for the cosmopolitan woman that dares to mix and match. For a woman that does not take her clothing too serious but just enjoys the art of dressing.

The creative spirit behind the Berlin- based label took its inspiration from a vacation in vibrant Los Angeles: sharp silhouettes, progressive fabrics and prints depict those influences. In addition to the pieces of his collection, Kilian Kerner presented an avant-garde jewellery collection. This collection emerged as a collaboration with Vojd Studios. Shoe-wise, the designer added Adidas Original sneakers for his menswear looks. The progressive design of those shoes underlines the edgy touch of the collection.

Worth of mentioning is also the fact the models wore headphones as accessories. The hair of the models was kept natural, with open hair and middle parting. The make- up of the models, super clean, just the cheeks appear slightly blushed.