A blocks, in contrast, in the details: the disruptive power of art joins and becomes contaminated in architecture – ephemeral – to wear for Autumn Winter 2017 Manuel Facchini.A collection like a treasure chest that breaks down and harmonizes contrasts combining the kinetic sculptural ars, 3D and supple Richard Sweeney to gothic architecture and algorithmic Michael Hansmeyer, under the banner of an arty-craftmenship space.The opposition talks in tissues where it continues the metamorphosis between rigidity and softness: the graphic elements are decomposed with illusionism meandering and seemingly antithetical on the chevron and check.   A mix of ancient and innovative form matter in which wires to connect to the world play without frontiers: the rock effect is created by new elements, such as metal sails that draw their sleeves or necklines funds.High-tech meets sports: the trend is dynamic leaders in confusing lines in alternating tissue where the couture effect is given by thermoforming for relief effects of 3d drawings or punched.Always win the proportions: the ‘asymmetry of inspiration is reflected in the volumes – in the shoulder long sleeve in which tissues, disappearing, creating an embroidery as a skeleton; contamination is total between fabrics and leather for an effect taouage à la page – jacquard fil coupe, transparency and together- relief in a second skin, to dare and to dose.The coats are over, are straight to the box or ovoidali- as nails, too long; coats with chevron cocoon effect are asymmetric -rigorosi front, soft behind. Many pants: straight, narrow or slightly flared at the bottom, often in skin or inserts, classic but never evolved, distorted and revised, between fluidity and rigidity.Dominate black and optical white lit by vitamin incursions of purple and dark red touches that add dynamism to the texture. – from Manuel Facchini All images courtesy of Manuel Facchini 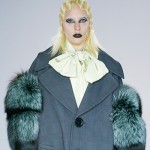 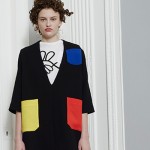