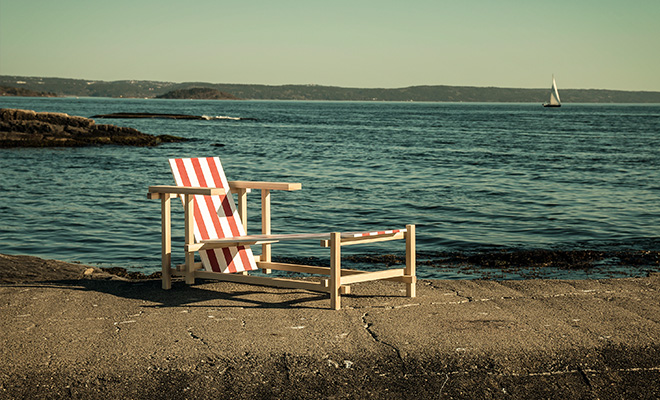 For the latest issue DESIGN SCENE editor KATARINA DJORIC sits down for an interview with the much talked about furniture designer EDVIN KLASSON. Katarina and Edwin talk about the beginnings of his design career, talents who influenced him and current projects.

How did you become a designer?

Drawing and building things have always been a large part of my life. I simply wanted to do the things I love to do. The profession matched my personal traits, being systematical and creative at the same time. Where do you seek design inspiration?

I find inspiration in literally anything, anywhere, but I often force myself to be inspired by randomly looking at pictures in books, magazines or online. Everything from baroque art, circus costumes or 50’s diners can be inspirational. I like to mix different things together. I always have a sketch book with me wherever I go.

What designers have influenced you over the years?

The wit and humor of the Memphis group have influenced me a lot. I generally have a soft spot for Italian designers – they always put a smile on my face. Verner Panton, Gerrit Rietveld and Peter Opsvik have also influenced me. Their designs kind of existed on the side of any prevailing trend or movement, while at the same time being influential and innovative. What are the benefits of being a designer?

A designer can communicate through drawings, models or by structuring information in a visual way. It really helps other people understand what’s in your mind in a short and simple manner.

What are the disadvantages?

A constant overload of ideas and projects. You have to keep track on everything you are doing at the same time, and make sure everything is great. I could literally be working all the time, but I don’t think that would do the projects any good. All work and no play make designers dull! How do you choose your materials?

Usually I start designing without having any materials in mind. Initially I am more focused on the product’s visual appearance, how it is going to work and so on. Materials and surface finishes are chosen at the end, either out of constructional necessity or in order to create an interesting interaction between elements. Sustainability and natural materials, such as wood, is always considered first.

What are you currently working on?

I am at the moment working for different clients on a toilet range, an electric radiator range, a rocking chair and a wire chair. I have been designing and prototyping a small range of steel and concrete objects with a friend for a couple of months now, which I hope will make a great exhibition at some point. An indoor bench for Mokasser is almost completed and production-ready – it will probably be released early this fall.

How long does it take to develop a product?

Either everything happens in a flash, or it takes a really, really long time. A lot of what I consider my best work has come about quickly, and I feel slightly puzzled when that happens. What was the best design advice anyone gave you?

While studying in Germany my professor in conceptual drawing once said to me that a great sofa has yet to be designed. It is more a motivational thing than a design advice, but I still think about it now and then. In a somewhat abstract sense it is true.

What gets you excited these days?

I find anything designed by Patricia Urquiola amazing. Her designs have a sense of warm, tropical southerness to it, which is pretty far from Scandinavian Design, and I like that.

If you weren’t a designer what would you be?

I dreamt of becoming a cartoonist when I was a kid, so I guess that would have been great. According to some of my work colleagues the best job in the world is being a janitor, constantly fixing things! Not sure about that one.