“The new Missoni Summer 2017 campaign marks Angela Missoni’s 20th anniversary at the helm of Missoni’s creative direction. Angela chose her summer residence in Puntaldia, Sardegna as the setting for this shoot as well as Irina Shayk and Tim Dibble as the faces for this campaign.
Collections of every genre, pieces of modern art and artisanal samplings; shells and colorful ceramics; paintings and tapestries. Juxtapositions and accumulations; associations and superimpositions of styles, materials, forms and ornamentations that alternate and contrast with the floral culture, exuberant ascent and the design and colors of enormous flowering plants to create a sensual pictorial continuum that begins from the internal structure of the house and flows into the external gardens. This season’s campaign beautifully frames the ‘put togethers’ of stripes, large bands, geometric patterns, tonal gradations and collocations that are decisive, brilliantly colorful gems, from Missoni’s Summer 2017 collections.“ 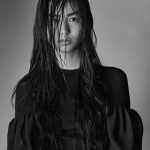 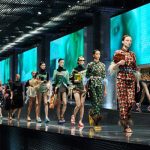