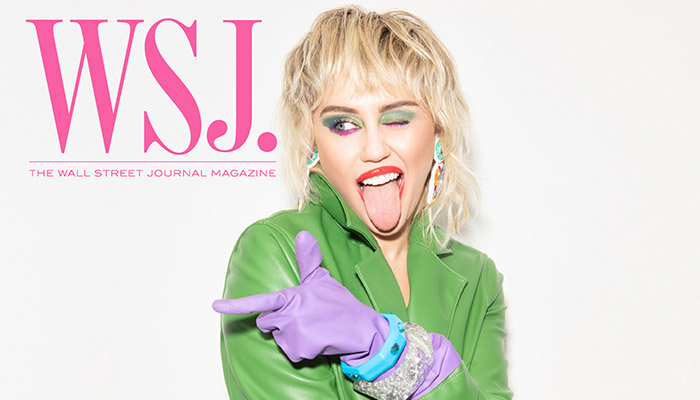 The one and only Miley Cyrus takes the digital cover story of WSJ. Magazine‘s June 2020 edition styled and photographed by Miley herself.

Oh, my God! With Elizabeth Warren, I was so nervous I even put on a nice linen blouse. I don’t even own a friggin’ blouse! Everything in my closets is studded or leather or latex, honey. So I’m going through my damn closet, like, What am I going to wear to interview the friggin’ senator? That was my main stress, of course. How am I going to serve political realness? But a lot of the time it’s been important for me to be wearing what everyone else is wearing at home. I’m in my sweatpants and a topknot, just like everyone else. I’ve only washed my hair twice for the show: once for Elton John and once for Senator Warren. – Miley Cyrus

On her talk show heroes:
I live somewhere between Cher and Oprah. I love the Cher show because I love the idea of a variety show, which is why my show incorporates music. I’m joking about Ellen bullying me about having no music on the show. It’s also because [music] is a part of the way that I communicate. That’s why it was so important for me to have so many writers, like Alicia Keys and even [actor] Lili Reinhart, who read a couple of her poems from her new book [ Swimming Lessons, out in September].

On whether she was ever afraid of doing the show:
Yes, because I do not want to be a preacher or a teacher. I want to learn, and I want to listen. I want to just pass the microphone that usually is in my hands to someone who does not [have one]. Local activists fighting for their community don’t have the platforms I have, and I wanted to share that. I’m very, very cautious of ever claiming that I know best, because the one thing I know is that I don’t.

On when she realized that her show had influence:
I’m so involved in the show—writing the intro, writing the questions and making sure I know all the information about the guests—I didn’t have a lot of time to look at the way that the press was receiving it. I only knew my community was finding peace in it. Selena Gomez DM’ed me and said, “I love what you’re doing with this platform; I’m so inspired. I’d love to talk about my story and talk about mental health.” Then the folks that I’m talking to now, the everyday activists, started sliding into my DMs and started saying, “Hey, we’d love to talk about Skid Row, and we want to talk about indigenous peoples, and we want to talk about the way that this is affecting the environment.” It was cool to see everyone coming into my direct messages. When my community and peers and local heroes and activists started reaching out to me, I knew I had something special that was actually doing what it was created to do. It was connecting people.

On how she books her guests through direct messages:
I am the ultimate slide-into-the-DMs! This is the way that I have communicated and actually gotten things done for years. I ended up thinking, “Shit, I might as well send one to Reese Witherspoon. She’s probably not going to answer, but OK.” And then she answered and said she would love to give me a couple minutes. That was awesome. [I did that] with people that I knew and people that I didn’t know. I get some messages that say “seen” [and no response], which I guess is a no. And then I’ll send a smiley face emoji for like 10 days in a row.

The door is always open! I’m sure some people I was reaching out to felt the same way I do, which is that my experience is so rare, it almost doesn’t feel right to talk about. This isn’t Covid-19, what I’m experiencing. My life has been pushed pause on, but really I have no idea what this pandemic is like. I am comfortable in my space and able to put food on my table and [I am] financially stable, and that’s just not the story for a lot of people. I’m sure a lot of the hesitation for other people saying yes to doing the show is because it almost doesn’t feel right for celebrities to share our experience. Because it just doesn’t compare.

On her superpower:
I’ve got a funny one and then my real one. My funny one is that I would walk into any place and I’d immediately get all the tea [gossip]. A little subtitle would come down to the bottom of my vision, and it would just tell me all the tea that’s going on in every group, and I could just be the nosiest person in the world. That’s why I’ll be a good talk show host, because I’m really just nosy as f—. But for my real superpower, it would be for people to know their own power. I wish I could wave a wand or put a crown on someone who feels like they are not enough, and then they feel that they are. That’s another reason I wanted to start the show. I want to be able to give my sense of power to other people. And, yes, there have been times in my life I wished I could have even done that to myself.

On this being the longest time she’s gone without seeing her family:
Yes. And my mom’s mom is still with us. I’m so lucky, and we want to keep it that way, so we haven’t been able to see her. My grandma runs my fan club. She is my biggest fan and she doesn’t have Instagram, so she hasn’t seen the show. I’m going to have to put this on VHS for her. But she’s my everything. She lives in senior living, so we are not able to go visit her. It’s the longest I’ve gone without seeing my mom or my grandma.

On how she’s coping being away from her family:
My mom [manager Tish Cyrus] and I pretty much FaceTime from the minute I’m awake until I’m asleep. I love that she has nothing to do; so she has to just sit with me every moment, which is like the good old days! My dad [singer, songwriter and actor Billy Ray Cyrus] had two BlackBerrys: He said two BlackBerrys equal an iPhone, which is not true. So we mailed my dad an iPhone that was already set up that only has one button, which is FaceTime, on the home screen.

On her new music:
Yeah, I kind of finished my record and I was ready to go to all these festivals, but it’s hard to feel appropriate releasing music at this time. But I made a record that’s kind of rock influenced, hence my mullet. This was not just a random Wednesday Tiger King haircut. This was to go with the new music, but now I’m rolling through Calabasas with a Joe Exotic mullet.

On the first thing she wants to do when you get out of quarantine:
The first thing I want to do is definitely hug my mom and dad when I get the green light that it’s safe. Right now, my mom won’t get anywhere near me.

Mark Ronson on Mileys show:
“Like everything else, Miley got there early and she knows how to connect with people,” says Grammy-winning producer Mark Ronson, who collaborated with Cyrus on his 2018 song “Nothing Breaks Like a Heart.” “She’s Mensa-level smart and always ahead of the curve.”

Selena Gomez on Miley’s show:
“I happened to catch it one day and loved what she was doing and knew I wanted to be a guest. I liked the rawness of the show,” she says. “I feel like people are yearning for that type of realism right now. Not something overly produced.” Gomez appeared on episode 15 and spoke candidly about being diagnosed as bipolar. She says she wasn’t surprised to see a new side of Cyrus: “Miley has never been afraid to take risks or put herself out there. This new role really seems to suit her, and you can tell she’s really enjoying herself.”

Jimmy Fallon On Miley’s show:
He goes through a checklist of Cyrus’s skills: “Can she sing? Check. Can she act? Check. Can she host a talk show? Check. She really can do it all.”