Contributing Editor Nikola Bajovic sits down with Jacob to talk about his acting career, AAPI representation, Spiderman and his latest show Reginald The Vampire.

Could you tell us more about what led you to acting, and how did it all start?

I would say attending drama school led me to becoming an actor. Learning about different methods of acting, theater, and film truly piqued my interest in ways other professions never have. Ironically, music was the driving force that started my acting career. It was my first real outlet for creative expression, but what made it difficult was the place the arts had in Hawaii. It’s a smaller community, so I didn’t really have a place to explore myself and who I wanted to be. Through music, I was able to stumble upon the opportunity to move out to the mainland and go to drama school in New York. It was the unexpected catalyst for sure.

What is your pre-set routine and what’s your secret of preparing for a role?

I don’t really have a pre-set routine. I’m super boring [laughs]. I just wake up, brush my teeth, go to the gym, and then head to work for makeup and wardrobe. I don’t think what I do is considered a secret – it’s just my sort of process. But basically, if you’re given the whole script, for whatever you’re doing, read it twice. Once as a casual read, then the second time you do more of a critical thinking read. Try to understand the major beats of the story, each character’s arch, and the overall message that’s trying to be conveyed. After that’s done, I take my scenes from the script and really work on it, as in, really dig into my character’s story arch, the place they would be in mentally, emotionally, and physically. If you’re just doing a scene or two, and you don’t get the whole script, just really work on the scenes you’re given, and when you get to set, be open and ready to be directed by the director.

You have a really big potential to become huge in the movie industry. Your roles say it all! What kind of roles are you on the lookout for right now?

Thank you! That’s truly flattering. The kind of roles I’m looking out for right now, are ones that I find to be different and interesting. Really, anything that piques my interest. Whether it’s an indie piece, a bigger budgeted project, or even theater, I just want to do things I like and that I think are cool. But HIGHKEY I’m trying to lead a Star Wars series [ laughs]. 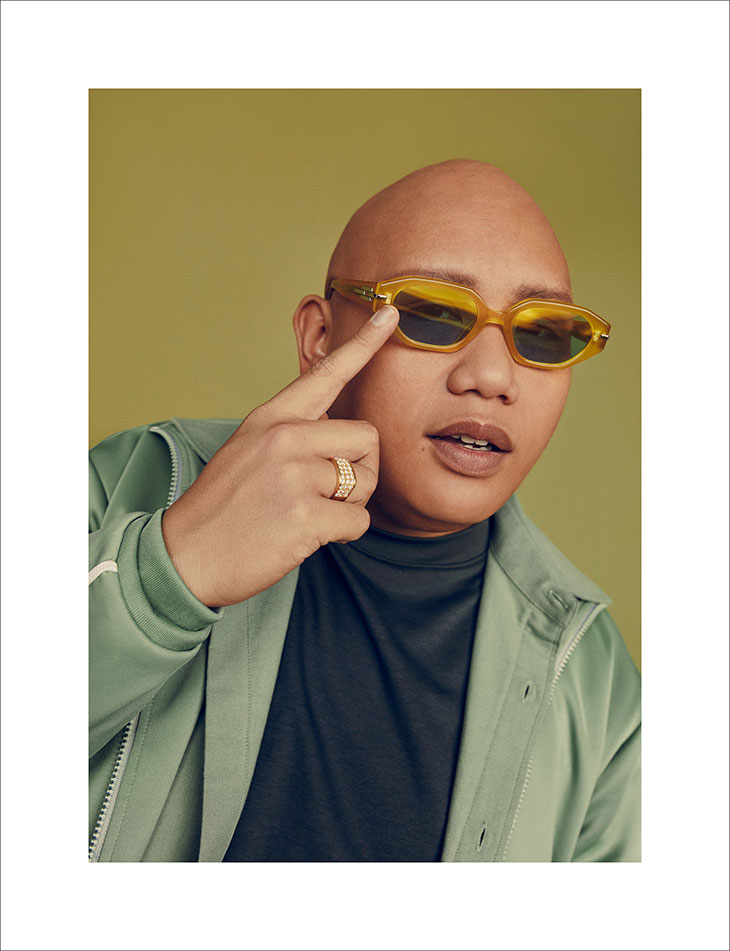 You definitely will be known as someone with a major comedic talent in your roles. Do you have something that you want to be known for but people don’t recognize it yet?

Again, that is so nice of you to say – I really appreciate the compliment. I don’t necessarily care for others to acknowledge I have other talents. I will be doing all sorts of different things in the future and if people recognize that I do have other talents then that’s awesome. But if they don’t, that’s still awesome. I try to do things out of self-satisfaction, creative fulfillment, and not for the public’s opinions.

I think the first and the most important thing about acting is that “Nothing is perfect like in the movie”? Do you agree with that?

I completely agree with that statement. We constantly edit things to our liking on purpose – to make it look a certain way, to tell a certain story. But obviously, in the process of making a movie or tv show, there will be blunders, failures, but it’s all a part of the beautiful madness.

Spooky month is coming and with that your new series! Can you tell us something more about your “Reginald the Vampire” role?

In Reginald the Vampire, which is based on the series of books called Fat Vampire by Johnny Truant, we follow the story of a regular guy who becomes the hero of his own story. By becoming a vampire, he understands the meaning of life through death. But before being turned, Reginald, being the normal guy that he is, has accepted his fate as someone who isn’t actually special, and is constantly reminded not just by people around him, but by society that he needs to be a certain way, and look a certain way to be accepted and be a winner. This is only amplified by the vampire community after he’s been turned. So, we watch as he navigates through love, friendships, learning that it’s what’s on the inside that makes each one of us special and most importantly, fighting off a vampire chieftain that absolutely wants him dead.

I’ll digress a little and say that “Watch Room” was fantastic, but can you describe to us what was your first impression when you got cast in a Marvel movie and what that movie brought to your career?

I’m happy you liked that short! It was such a cool and different thing for me to do at that time. I absolutely loved it, as well. I honestly don’t remember what my first impression was. I just remember being happy I had a job. I could’ve been scraping gum off the sidewalk, but as long as I was near the film set, my heart was full. Undoubtedly, being in the Spider-Man movies has brought me to this place in my career and has changed every facet of my life. I’m living my best life because of those movies. I feel so lucky, and for that I’m forever grateful for that time in my life.

Can you tell us some of your personal highlights from working on the “Spiderman” and “Reginald the Vampire”, a behind the scenes moments you will remember forever?

With Spider-Man, I’d say all the traveling, and giving back to the fans was the most rewarding and amazing experiences I’ve ever had. I will always cherish those moments. With Reginald, the whole experience was beautiful. It was my first time leading a show and producing; it gave me a lot of insight and knowledge that I’ll carry with me forever. There was this one day on Spider-Man 3 where Tom, Zendaya, Tobey, Andrew, and me were filming scenes together. We were hanging out in between setups for the camera, and we were talking about life, and all these things. Then, for a solid five minutes straight, we were all just laughing hard at this joke that we had, and it was such a highlight. There’s a lot of moments on Reginald where I felt it was such a special experience. It’s really hard to pick a certain moment, but I’d say, when we wrapped our show, that night was really something special. The emotions that were shared, the love everyone had for each other on the cast and crew was so infectious, I mean truly the whole filming of Reginald was just beautiful. 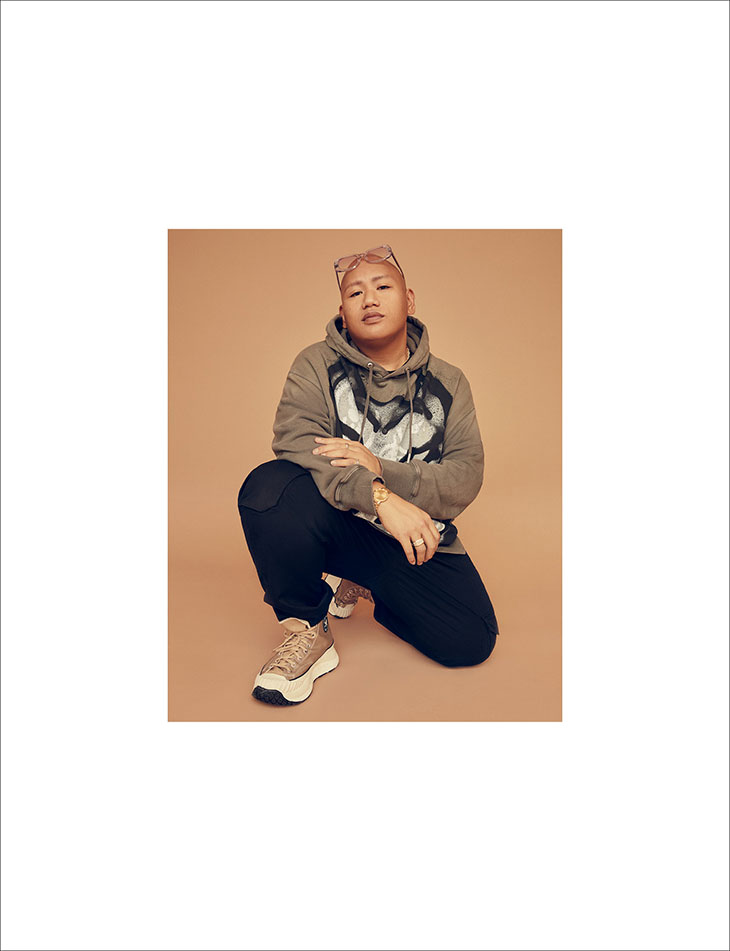 At DSCENE we believe it is still important to talk about diversity and representation. What would you say the industry could do for a better AAPI representation?

I believe the best thing the industry can do for the AAPI community is to hire more of us. Have them in the writers’ rooms, take a chance on their pitches. Give AAPI directors, actors, producers, entertainers, chances to be heard, to be relevant. And not just for the AAPI community but for EVERY marginalized group.

You have a lot of young fans. Do you have some advice for the young people who want to start with acting?

Being an actor is more than fame, money, and success. If that’s what you’re searching for, more power to you, but it’s truly something you have to be passionate about. Not everyone gets the same chances as others and the industry is ruthless. It’s an unfair landscape, and fame is the ficklest part of it all. You have to really take all of these things into consideration, because you’re not always going to be winning. If anything, you’ll face a lot of rejection. But if it’s your passion, every opportunity is an amazing experience. Now, for my mostly, practical advice, if you don’t have a manager or agent helping you out, which most of us who start out don’t, find workshops to go to. Go to some acting classes. You’ll find yourself around the people you need to be around in order to move ahead. If you want to take the industry head on, I’d say go on backstage or actor’s access to put yourself out on auditions. But most importantly, like with anything in life, it’s all uncertain. Just do things that make you happy and go through the highs and lows because it’s all a unique and beautiful experience.