Magazine: V Magazine
Published: September 2009.
Issue: #61
Directed by Stephen Smith
Website: www.vmagazine.com
Preview the whole new issue of V magazine in this animated short (little over a minute), with V’s spectacular September issue nobody can really say that the print is dead, at least here’s this video to prove everyone wrong.
*Courtesy of V Magazine
90
SHARES
ShareTweetPinterest 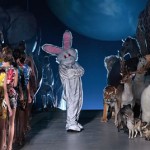