Fashion Week: Milano Moda Uomo
Season: Spring Summer 2012
Collections: Menswear – Emporio Armani, Vivienne Westwood and Iceberg
In the part two of our Milano Fashion Week adventure we are sharing some of our images from Emporio Armani, Vivienne Westwod and Iceberg shows. If we would have to separate the absolute highlight among these and perhaps of the whole week for us was the Vivienne show. While Iceberg and Emporio Armani did not stray away from the quality of their clothes and comfort of their faithful buyers it resulted with a case of a runway presentation and an already working formula, still Dame Vivienne Westwood has once again delivered a highly powered show leaving a lasting impression on the present audience.

View more of our images and videos after the jump: Emporio Armani show was held in the impressive Armani Teatro, where multitude of models presented the next years Summer vision of Giorgio Armani reflecting on his very well respected sense of sports elegance. (These pretty bad pictures of ours probably come from the fact we are not a part of the blogger Disney Parade, so it was a sky high view from the above). The Olympians inspired Spring Summer 2012 Vivienne Westwood MAN Label collection has been packed with layered summer looks, ready for multiple occasions, as always models make up and styling has outstandingly resonated the theme. We will talk about the collections some more in the upcoming review, so to reflect this time on the Light Sculptures which came out of  Vivienne's collaboration with artist Marco Lodola the founder of  "New Futurism".  Sculptures specially created for the occasion held layers of inspiration, from the upcoming Olympic games in London, to the legendary documentary Olympia at the same time taking inspiration from the sixty white marble statues at the Stadio dei Marmi al Foro Italico. The homage to the famed Jean-Charles de Castelbajac sweaters did not return this time (certainly a wrong season to expect that, but how can you not want them over and over?) the Spring Summer collection has brought the much coveted navy toned colour palette to Iceberg's latest collection. The style is refined, subtle and young, giving you a sense of everything you would want and expect from Iceberg. The funny fact – sitting in the 5th row did not bring you a silly gift placed on the sits of four in front of you, sometimes you just run out of gifts? To make an excuses for the organizers a gift-bag is hardly ever a present entity on Milano show, so nobody even expects it, nevertheless eyed quite a few great looks so well done Mr Gerani!

Click HERE for our Part 1 of Milano Fashion Week. 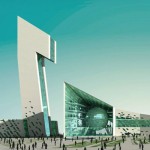 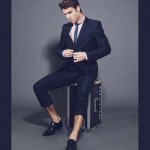