For all three covers and more details continue below: For the pages of new Interview Germany Dree admits that the one family member she has nothing in common with is her great-grandfather Ernest.

“I had to read ‘The Old Man and the Sea’ in school and barely made it through, I was so bored. People kept staring at me, expecting me to love it. I mean, those people had read American Literature at university and were huge fans of Ernest Hemingway. They were obviously freaking out about his great-granddaughter taking their classes, but she didn’t give a shit.“

“It was definitely cool to go to a school that had the same name as me, but other than that, I hung out in the garden alone, sang to myself, and made weird collages out of stones – it was pretty pathetic.“

Dree was photographed for Interview by Sebastian Faena with styling from Julia Von Boehm. Charlotte Gainsbourg talking about her work with famed Lars von Trier shares with Doug Aitken in ‘Interview’: “It’s pretty nerve wrecking to go into a scene without having a plan. You just have to accept you will make a fool of yourself.”

Emily DiDonato was photographed by Giampaolo Sgura with styling by Klaus Stockhausen. 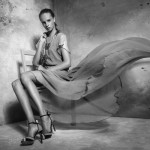 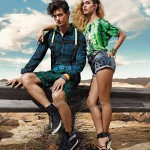