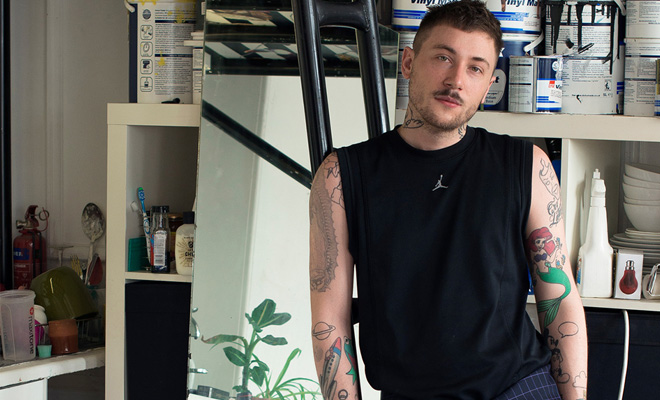 He’s been making waves within men’s fashion since his dive-bomb into the scene last year. Forgive the marine slang – The Little Mermaid was Bobby’s childhood companion and she was the inspiration for his acclaimed SS15 collection. He makes us coffee before discussing tattoos and his admiration for animation. Photos Nastassja Thompson.

For more of Bobby Abbley interview with our fashion editor Christopher Maul for D’SCENE Magazine‘s Fall edition continue below:

Did you always want to become a designer as a child?
I convinced myself that I was going to be an astronaut. I didn’t get very far – I got as far as a chemistry set.

Why did you choose not to take an MA in fashion?
No offence to anyone who’s done one, but sometimes I think they’re unnecessary. When I did my BA I kind of knew what I wanted to do design wise so I didn’t really need that extra time to work myself out. Also, I think my year was very fortunate in particular because Vivienne Westwood came to our show – she came backstage and she was like ‘when are you going to come work for me?’ . I started working straight away – I suppose that stopped me being in school any longer.

When did you start work on your own label?
When I was working at Alexander McQueen I started to save some money and I started making a collection. Once I left, I made a bigger collection than I actually needed to and my PR [Ella Dror] saw it and pulled me in for a really scary meeting. She said she’d test the water and gauge the reaction at the press day and it went really well. Fashion East then offered me my first installation in January 2013. Why does menswear appeal to you rather than womenswear?
I’m quite a selfish designer. Once I have my ideas I think about what I would like to wear or what I would like to see from the collection. I don’t really think of other people. I think it’s good to have a bit of antagonism sometimes, some people will really like it and others won’t.

Who do you admire?
I love James Long.

Does he know?
Yes, he definitely knows. I think his menswear is amazing. He is such a nice person as well, I know some designers that are a certain way, and thats not a good way.

Do you think London is the menswear capital of the world?
Yeah, I think London is good because there are alternative routes and platforms to success here. I remember when men’s day was shoved onto the end of women’s fashion week but now it’s really grown into it’s own with London Collections: Men. It’s exciting to be a part of it all.

Why do you decide to showcase in London?
London is my home. Paris is amazing but I don’t particularly like it because it’s so boring – it kills me to go there twice a year for work. London is old but it has a perfect mix of new stuff too. Places like Paris and Milan are like time warps – there’s nothing there. In Milan you’d expect men to walk around really stylish but instead it’s just fat old men carrying bread around. When did your fascination with animation begin?
When I was younger I always used to relate to fictional characters more. I used to watch cartoon characters on repeat because it felt like I knew them. It sounds weird saying it out loud but that’s how it is. I guess a bit of that has never gone away – I still relate to them in a personal way. I take my job very seriously but sometimes fashion can take itself way too seriously. Sometimes it’s nice to create a sense of wonder with some things. Who doesn’t like to feel a bit nostalgic and remember that time when you’re a kid, when anything is possible?

What’s in the pipeline for you?
I can’t give much away but it’s definitely going to be fun. 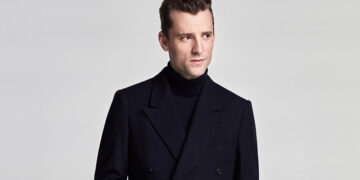 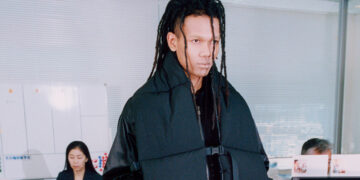 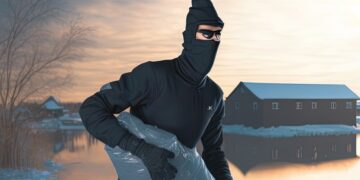