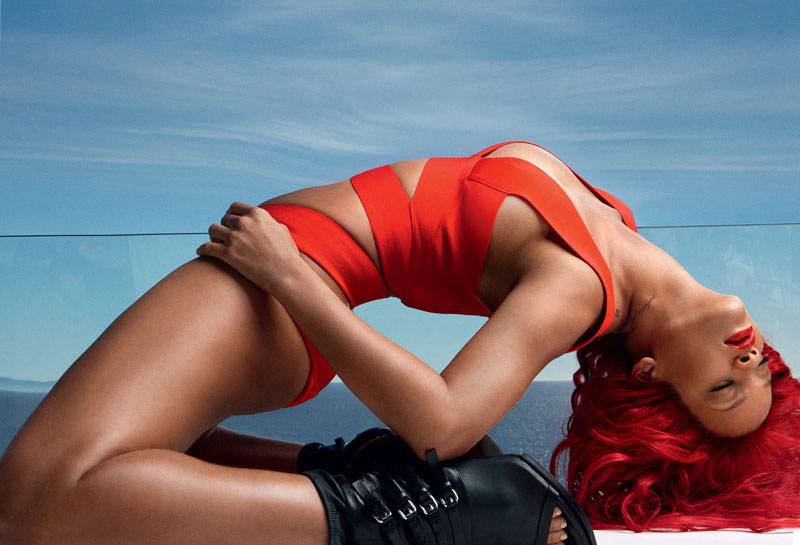 Rihanna‘s first album is literally a decade away, has the strongest left a long-lasting mark on the fashion scene? See it yourself, in our  TOP 10 RIHANNA FASHION MOMENTS.

Photo above Annie Leibovitz for VOGUE

#10 RIHANNA AND DUDLEY IN WE FOUND LOVE VIDEO

In 2011 Rihanna single-handedly brings back the denim jacket and makes us all happy for leaving our old jackets for almost a decade int he closet. Along with scoring a hit with now over half a billion views on YouTube. #09 RIHANNA BECOMES THE FACE OF ARMANI

Same year Rihanna catches the eye of Mr. Armani or well the PR team of the Italian fashion house becoming the striking new face of ARMANI JEANS (and underwear). #08 RIHANNA SHOWS SHE’S ALWAYS IN FOR A TOP SHOOT

Teaming up with the renowned indie fashion and photography magazine 032c Rihanna poses for one of her best photo sessions to date, captured by the one and only Inez & Vinoodh. Need to see more? Rihanna takes the runway look of Mariacarla Boscono’s back and makes the Dolce & Gabbana suit pieces the centre piece of Met Gala. Back in 2009! #06 LANDING YET ANOTHER FASHION CAMPAIGN

Catches the eye of Olivier Rousteing who just moved into the house of BALMAIN and called up Rihanna to become the face of his Spring Summer 2014 collection. #05 SHE’ S MARILYN MONROE IN ARMANO FOR BRITISH VOGUE

Platinum Blonde and that movie about Marilyn nominated are all the rage in 2011, when Riri was busy grabbing the campaigns. While posing in Armani’s Jeans and undies for the Italian designer’s ads, British fashion bible dresses Rihanna in ARMANI PRIVE for their November cover.

#04 BAD GIRL RIRI IS BORN WHEN INSTAGRAM BECAME A THING #02 BECOMES AN ACTRESS  FOR A DIOR SHORT FILM

The epic Dior short film shot at nite in Versaillers, published in May this year but seems it will take some time for anybody to top this. See more of the print campaign accompanying the video. #01 THE COVER OF AMERICAN VOGUE

The ultimate fashion degree, a stamp of approval, Fashion scene’s Oscar, call it anyway you want. By the blessing of Anna Wintour, Rihanna landed her showstopping Vogue cover shot by Annie Leibovitz back in April of 2011 (it was a busy year for Riri). See more of the shoot.