Actress Kristen Stewart lands the cover story of The New York Times T Style Magazine‘s Women’s Fashion issue captured by fashion photographer Karim Sadli. In charge of styling for After the Storm story was Marie-Amelie Sauve, who for the session dressed American stunner in selected black looks from brands such as Valentino, Chanel, Baserange, Only Hearts, Max Mara, Helmut Lang, and The Row among others. Beauty is work of hair stylist Damien Boissinot at Jed Root, makeup artist Hannah Murray, and manicurist Tracylee for Tim Howard Management. Set design is courtesy of Piers Hanmer, with production by Prodn.

“I’m not the typical showman, but at the same time, I want so badly to expose myself. I want to be understood and I want to be seen, and I want to do that in the rawest, purest, most naked way I can.
I would never talk about any of my relationships before, but once I started dating girls it seemed like there was an opportunity to represent something really positive. I still want to protect my personal life, but I don’t want to seem like I’m protecting the idea, so that does sort of feel like I owe something to people.” 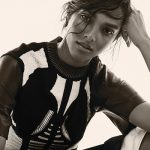 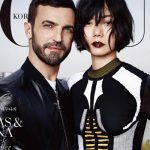