D’SCENE Magazine‘s Contributing Writer MATTI BYGOD sits down with PARIS HILTON for an exclusive interview to talk about her musical inspiration, business, music and future plans.

OUT NOW IN PRINT AND DIGITAL

Paris Hilton changed the culture of celebrity and the path to seeking it with her controversial rise to fame. From socialite to reality TV pioneer; Paris Hilton’s navigation into womanhood came with some highs, some lows and a large audience.

Many people already have a solid opinion on Paris Hilton. They love to hate her or they love to love her. A socialite from the age of 15, Paris’ resumé is never-ending, including: entrepreneur, actress, clothing designer, singer, and most recently music DJ. I love to love her and millions of fans online can’t get enough of her brand. With more than three dozen stores internationally Paris is an entrepreneur that deserves the respect she’s often denied by her naysayers. In 2003 Paris Hilton starred in one of the first waves of reality television that soon exploded into a booming genre in itself. The Simple Life was about two socialites out of place living a simpler life without money. The series premiered shortly after the release of her infamous tape and what may have destroyed her career launched Paris forever into the Zeitgeist. Paris Hilton’s career survived an onslaught of negative comments, jokes and parodies. She rose above the scrutiny with a determination to pursue the career she dreamed of, taking the good and bad attention and directing it to the brand she was building. Paris had cameos and starring roles in major films, she released a music album to critical success and launched clothing and perfume lines that continue to sell. Mastering the maneuver of turning negative press into brand leverage she inspired many would be and current stars to follow the path she paved. Paris has been credited with inventing the profession of “famous for being famous”. I would disagree. I think to say she’s famous for being famous discredits her long list of professional credits. Currently Paris is preparing for a summer residency in Ibiza. What’s influencing or inspiring your music right now? “I’m inspired by my life and travels. Going to music festivals like Burning Man has really opened my mind to different types of music. I am really inspired being in Ibiza and going out supporting my friends and listening to music. I’m really in love with Deep House.” Ibiza has one of the world’s most intense club scenes. Who were you obsessed with musically when you were growing up? “When I was growing up I was obsessed with Madonna and Michael Jackson. They really influenced me so much in my life, my music and fashion. I knew Michael my entire life, we were very close and he will always remain a huge inspiration of mine.” What kind of preparation goes into creating your sets? “There’s a lot of work that goes into preparing my sets. I have never played the same set twice in my life, it’s always something new which I love. I think it keeps things interesting. I’ve seen a lot of DJs who play the same set every time. I like to make it fun for my fans and for myself as well. I love music, so basically I will take the time to find my favorite songs, find remixes or make my own remix and mashups on Ableton. I take hours of music and decide what sounds best together and which cue points work together to pull together a great set. I practice in Club Paris at my house.”

How planned out is your wardrobe when you DJ? “My wardrobe when I DJ is always planned out. We were actually just in Melrose at the LED light store with my stylist Sammy, Charlie and Rosalyna who are making my costumes for this summer. It is so amazing, they light up and have lasers coming out of them. They look something like a Paris Barbie Robot. It’s amazing! If it’s something for my fragrance or for my business, then I dress completely different in a Chanel suit or in something elegant, classy or chic but if I’m performing, I love to dress up, it’s so much fun!” The Simple Life was a career launch point for the heiress. Having been on the club scene and modelling for a few years people had an idea of who Paris was but the public had no idea what she would bring to television. The Simple Life turned Paris and Nicole Richie into household names complete with a famous catch phrase. The show gave her a platform but would you consider doing reality TV again? “I get calls every single day from different networks and production companies that want to do another Paris Hilton Reality Show. I’ve turned everything down. For me to do something, it would really have to be groundbreaking, innovative and new. I was one of the first to have a reality show and I had so much fun doing it but now I want to focus on being a businesswoman, so it’s not much of a priority compared to my business and brand.”. How do you decide what’s right for your brand? “I get offered different product lines constantly. I’ll only do something that feels right for me. I only work with partners I can trust who make high quality products, who understand me, my vision and designs. I only put out products that I would actually wear and use.”

Most of her life has been spent in and around the public eye. Having been famous and working steady for more than a decade. What aspects of celebrity culture have been helping or hurting you? “I feel like the whole culture has really changed. It is a different world now with social media and social media has changed the world completely. I feel like I was one of the first pioneers to start this genre of celebrity. I love social media and being able to interact with my fans. The only negative thing is the lack of privacy as people will know where you are when you post things. What happened to me with the Bling Ring was definitely hurtful. Visibility can be very dangerous in that way.” What advice do you have for people who want to build a career like yours? “My advice to people would be to continue following their dreams, being confident in themselves and their products. Really explore what you’re passionate about and what you want to produce. I firmly believe in finding the right team of people to help make that happen. You need people you can trust to work with you that won’t alter your vision. I always see a lot people change, and that is one thing I never did. I always remained true to myself.” What can we expect from your brand in the near future? “I’m very excited, I’m just about to release my 23rd fragrance called Rose Rush and I have my new skincare line coming out which is an anti-aging line featuring an exclusive formula made with award winning natural ingredients. I also have 19 other product lines with products ranging from apparel to handbags, swimwear, lingerie, watches, sunglasses, cosmetics and more. I am so proud and excited to expand my brand.”

What does having it all feel like? “”I’ve never been so happy in my life. I feel like I really manifested love and happiness this year. I have met the love of my life, Chris. He is my best best friend and my everything. I am so blessed and excited for even more happy and fun memories. I feel so lucky… I love my life.” ”

For the session captured in Milano by Fashion Photographer Igor Cvoro, our D’SCENE Milan Fashion Editor Emily selected for Paris to wear Ermanno Scervino dress and Jitrois jacket for the print cover, while she’s dressed in total look Moschino for the digital cover. Paris is also wearing pieces from the likes of DROMe, Philipp Plein and Luvon to name a few.

Get your copy of D’SCENE Summer 2017 issue in PRINT and DIGITAL. 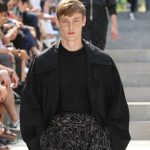