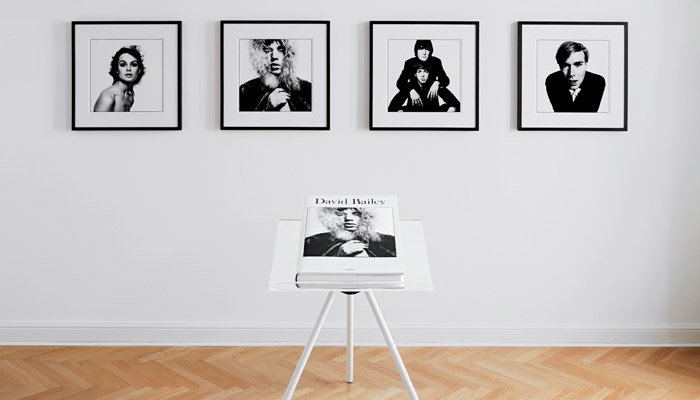 Read quotes from Bailey’s friends, as well as from photographer himself below:

Kate Moss: On my first shoot with Bailey, in 1996, I’d already heard a lot about how he can be quite direct. He took one look at me and said, “I don’t know what all the fuss is about!” I laughed! I thought he was fabulous.  I’d do any shoot with Bailey, any opportunity to spend time with him.

Bailey: Kate is the best model since Shrimpton. They’re both perfect in their own ways. It’s funny; my life started with Jean and ended with Kate in a way. Between them they are every model that ever was, do you see what I mean? Absolute magic.

Grace Coddington (former model and Vogue creative director): Everybody melted with him. Diana Vreeland [editor in chief of Vogue from 1962 to 1971] said something when she met him, I don’t know, “The English have arrived,” in a very grandiose way. Andy Warhol, too. Bailey caught everybody’s heart, and he got entrance to everybody’s lives and things, through his charm. He could be a bitch, but he could also be very charming. And naughty.

Coddington: When he arrived, suddenly the girls— I mean, I hate to say it, we were very f—able. Maybe you shouldn’t quote me saying that, but suddenly they were very approachable. Bailey made them all look like his girlfriends—they usually were his girlfriends. I mean, so often the editor was locked out of the studio because the session ended up on the floor, I think. I probably got pushed out a few times.

Penelope Tree: I was 18 when I went to live with him. He came to New York to pick me up and take me back to London. My mother answered the door, and when she saw it was Bailey, she tried to slam it shut in his face. But Bailey was too quick for her; he stuck the toe of his boot in the door and said, “Don’t worry, love! Just count yourself lucky I’m not a Rolling Stone.” You could say his hound-dog proclivities pushed us apart. On the other hand, I was 17 when we met, and he was 30.

He kept going on about this girl. “Meet her; she’s made for you.” He’s very—excitable. Catherine had a good English sense of humor, in a way. She loved a joke. We were married for seven years. She phoned me one day from Paris and said, “Bailey, we got divorced today.” And I said, “Yeah? Great, now we can be lovers.”

Damien Hirst (artist): I remember when I asked him, “What are French girls like in bed?” He said, “I dunno, I’ve only slept with two.” “Oh, who’s that?” And he said, “Catherine Deneuve and Brigitte Bardot.” Well, you kind of forget, don’t you? That he just inhabits a completely different world from us civilians.

Swannell: He was a romantic. You know the saying, “David Bailey makes love daily”? That was his reputation at Vogue. I think that’s why Jean Shrimpton left him eventually; she just couldn’t put up with it.

Swannell: He turned his house into a studio. And it was an event, if the Beatles or the Rolling Stones came up, some personality, we’d do the shoot and then go up, and he opened a few bottles of champagne and they’d be there till 10, 11 o’clock at night. Sometimes after that we’d go out to dinner.

Bailey on Mick Jaggar: If we were late, Mick would stay with me. He might have kept a couple of suits there, it was pretty laid back. With Penelope once, I said, “When’s your friend gonna leave?” She said, “He’s not my friend, he’s your friend.”

The first picture of Mick, I did it for myself. I showed it to Bea Miller, my editor at British Vogue, and she said, “Who is he?” And I said, “Rock ’n’ roll.” It was 1962. I said he had a great face. They said no, no— weren’t interested. So I showed it to Vreeland. She said, “I don’t care who he is, I’ll publish the picture.”

Manolo Blahnik: Somebody said Antonioni’s movie Blow-Up was about him—which was the most extraordinary film.

Stella McCartney: Bailey has been in my life from the moment I was born; he’s always been in the mix. A really strong character with a wicked sense of humor. One of the earliest stories that made me laugh was about my father [Paul McCartney] having a race with Bailey down Baker Street in London in the 1960s. Bailey was in his E-Type Jaguar, and my dad was in his Aston Martin. I like to think my father won.

Bailey: It’s all changed now, photography’s changed—it’s all dead now, my kind of photography’s finished. Everyone—they’re all on their iPhones, and they’re never going to look at them.

Gerhard Steidl (publisher): When you look at his portraits, for many of them I don’t know who it is. But the way he’s photographing, you can guess: This might be an actor, this might be a musician, this might be a politician, or this is just a man or woman from the street. And this kind of realism, where he makes the shot without any decoration and without any additives—there is no styling, nothing. He just has a splendid eye on the person, and he brings this certain person in the position in front of his camera. The portrayed person is not acting. It is a kind of being naked. Bailey has never made a mistake. He never changes his mind, and if he changes his mind then there is a strong reason.

Bailey: I’m lucky, touch wood—I’ve never been bored. There’s always something to do, isn’t there? Guess I’ll be bored when I die, because there’ll be nothing to do except be dead. In a way, portraits are the last photography that will ever be finished. You’ve got a connection between two people. Art photographers always have a young girl, I don’t know, 18 or something, with a flowery dress standing on flowery wallpaper, and it’s the same picture. She looks bored and lost. Well, I hope mine never look bored. They can look lost if they like, but not bored.