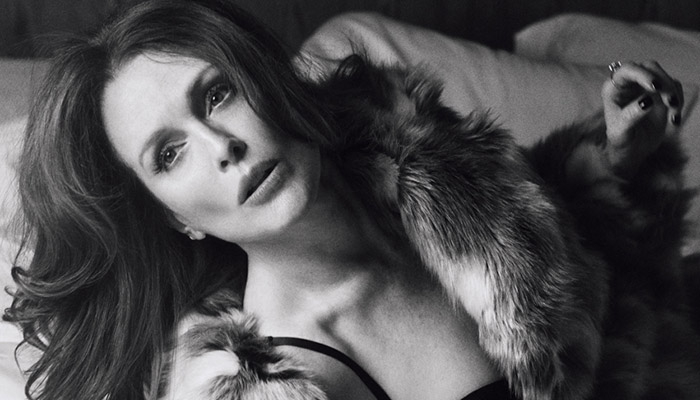 “You can’t have it as a goal. It can’t be. It’s a marker. I remember somebody asked Jodie Foster about winning an Oscar, and she said, ‘Oh, my God, it was such a relief.’ I laughed, because that is how it feels. You have to work for the work. You have to like the process and like doing it because you like doing it. And yet our culture has these competitions and these prizes…so on one hand, it feels like, Phew.  On the other hand, it’s like, Are you kidding? Did that actually happen to me?” – Moore on winning an Oscar

Moore on being a sports parent (her son Cal is a member of the basketball team on which Steph Curry once played):
Julianne Moore is a bona fide sports parent, cheering in the stands for too many games to count. “We’re very proud of him,” “What’s so funny is that there are all those families that are like, ‘What? You want to be an actor? Are you kidding? Get a real job!’ When [Cal] wanted to play basketball I was like, ‘What? You want to play sports? What about music?’”

Moore on counseling her kids on career and life choices:
“It’s hard to continue to be employed, continue to do work that interests you,” she says. “I talk about that with my kids all the time. As they’re making choices…I’m like, If you’re lucky to find something that interests you and to be able to pursue it, that’s fantastic. That’s what you want. That’s a measure of success if you’re doing something that you really enjoy and then you manage to get paid, because that’s not a given.”

Moore on using the NRA’s aggressive public relations tactics against them:
“Culturally, people were loath to speak about the Second Amendment and guns, because somehow it was taboo,” Moore says. “It was taboo because the [National Rifle Association] has made it taboo, claiming people were un-American if they were talking about this kind of stuff. So, I was like, “All right, so if [the NRA] has managed to wage this public relations campaign from their end, why don’t I have the people in my community—our community—speaking up?”

Moore on Walmart’s public appeal to its customers in open-carry states to not bring weapons into its stores and announced new rules on ammunition sales:
“That’s success,” Moore says. “That’s Moms Demand [Action], people saying, ‘Hey, we would like to shop in your stores.’ If you have an opportunity to effect change by what you purchase, why not? We’re in a capitalist society.”
“I felt like I was following all these activists and moms—Shannon Watts in particular,” she says. “I feel like I’m an acolyte: How can I help her; how can I help them?”

Moore on Gloria Steinem (she portrays the iconic feminist in The Glorias out in January 2020. Steinem was an advisor on the film:
Moore says she’d never met Steinem before but came away inspired. “She’s just as glorious as you’d imagine,” Moore says. “She’s very smart, which goes without saying, but she’s also incredibly thoughtful and patient and tolerant. Her ability to not be rash, and to speak to people who are very different than she is and not judge is really exemplary. You literally think, OK, what would Gloria Steinem do? How would she handle this situation? Because she’d handle it beautifully.” (Steinem returns the compliment to Moore: “She’s a miracle of intelligence and empathy.”)

Moore on what she considers a perfect day in New York City:
She tells a story about a recent Sunday when the kids were elsewhere and she and Freundlich walked across downtown for brunch, and along the way they kept running into friends. They stopped by an old pal’s house. They went to a spice shop in the East Village. They ran into some kids who’d gone to school with their children. It was one of those appointment-free days in the city that blur into something magical. “You just walk, walk, walk, and it feels like a small town, because it kind of is,” Moore says. “I think that’s pretty perfect.”