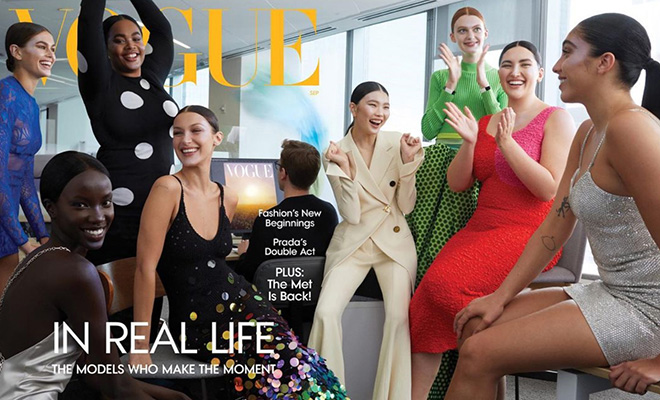 In charge of the styling were magazine’s Fashion Director Tonne Goodman as wells as contributing Fashion Editor Gabriella Karefa-Johnson.

In the accompanying cover story photographed at VOGUE’s New York office space by Ethan James Green, even Anna Wintour makes a cameo appearance via a Zoom Call alongside magazine’s editorial team throughout the story.

It is tempting to pan across the faces on these pages and see the shattering of beauty norms: There’s no dominant type, no singular standard for readers to measure themselves against. For far too long, that standard was bone-thin, painfully young, cisgender, and, by an overwhelming margin, white. Such uniformity now seems outrageous, both antiquated and out of sync with a culture rejoicing in the hard-fought visibility of people who mirror the splendid multiplicity of our modern global society. Yet the mind snags on this idea that beauty norms have gone out the window: There is still, of course, currency in being a slim, conventionally pretty white woman, as most-followed female TikTok stars Charli D’Amelio and Addison Rae might attest. On Instagram, lingerie ads featuring women with voluptuous fat rolls alternate with others for products promising speedy post-pandemic weight loss. There’s work yet to do on this front. – shares American Vogue