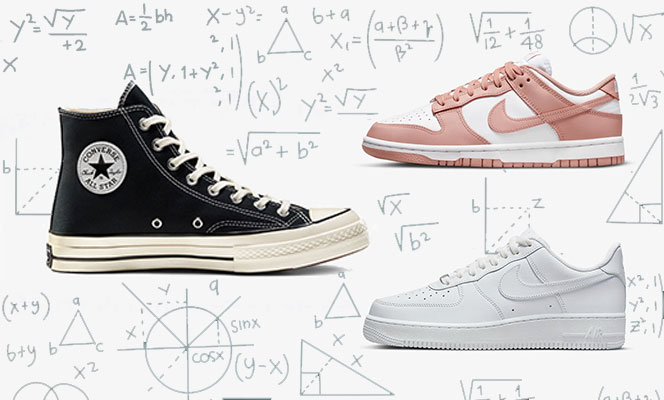 Prepping your first day of school fit? We all know the feeling. The excitement about seeing your friends after the summer break and butterflies in your stomach when choosing the right outfit. At least you have a reason to grab a new pair of sneakers.

DSCENE Editors bring you the best “back to school” sneakers, from your favorite brands like Nike and Converse that can be worn in or out of the classroom.

Fans’ favorite Panda dunk lows are back, just in time for a new school season. The black and white colorway instantly became one of the best selling sneakers, sometimes reselling for a dizzying $400 and more.

The model brings a classic two-tone look to its well-known basketball silhouette. It features a low-top build made in premium leather. Its white base is contrasted by black overlays, adorned with a black Swoosh branding. The concentric rubber outsole also features the two-tone look, as well as an added perforations on the front for extra breathability,

Designed by Bruce Kilgore and introduced in 1982, Nike Air Force 1s revolutionized the sneaker culture forever. Four decades since its first release, the model is still one of the best selling, no longer as a basketball shoe, it also took the streets by storm.

White on white! The radiance lives on in the Nike Air Force 1 ’07, the b-ball OG that puts a fresh spin on what you know best: durably stitched overlays, clean finishes and the perfect amount of flash to make you shine. – from Nike.

Simple and minimalistic, it can’t get any better. Designed for ultimate street style, the all-white combo is easy to style and combine with almost any outfit. It features the stitched overlays on the upper that add heritage style, durability and support,  while providing an all-day comfort.

Originally created as a basketball shoe, the Dunk was later introduced to the streets and quickly became on of the favorite models on the market. Debuted in 1985 on the college hardwood, the sneakers still deliver bold colorways and remain a go-to silhouette for fans across both sport and culture.

Refreshed with a softer palette for the summer, the Nike Dunk Low ‘Rose Whisper’ features a rose gold and white colour blocking. The neutral shades deliver seasonal style and subtle touch to your outfit.

Originally released in 2018, Nike Air Max 270 is the first-ever Air Max created specifically to be a casual silhouette, even thought it is equipped with the biggest Air bag to date. Since then, a running-inspired lifestyle silhouette have released in several colorways.

In 2020, Nike Air Max 270 has released the ‘Kentucky’ colorway, taking things back to basics. The colorway dresses the mesh upper in a white shade, аs well as a lace unit, counter, and midsole. The Air unit is coated in a transparent blue, while the outsole comes in the same shade. The shoe is adorned with miniature Swooshes at the forefoot and profile in the same shade, as well as the stitching and the branding at the sockline, tongue, and heel.

Initially developed as a basketball sneakers in the early 20th century, the Chuck Taylor All Star evolved into one of the most popular sneakers, ever. Today, the Chuck 70 celebrates the heritage by bringing together archival-inspired details with modern comfort updates.