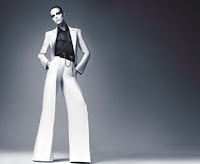 Ad Campaign: Gianfranco Ferrè
Collection: S/S 08
Model: Freja Beha Erichsen
Photographed by: David Sims
Lars Nilsson may be settling into the pilot's seat at Gianfranco Ferré, but he still wanted to show his vision for the fashion house so he planned a transitional ad campaign. Though the ensemble — a sharply tailored blazer cut close to the body over a silk blouse and high-waisted, wide-legged pants — was part of the spring collection, designed by the late designer and his assistant, Liborio Capizzi — the mood was imparted by Nilsson. David Sims shot the black-and-white image, featuring model Freja Beha Erichsen, in New York's Milk Studios. The campaign breaks worldwide in February.

"It was important for me to show something that reflected my own aesthetic and my vision," said Nilsson. "It helps distill the strong essence of the brand while offering a clean and modern platform upon which to move forward.
Source: thefashionspot.com and WWD