Photographer: Dusan Reljin
Website: drstudios.com
Professional Tennis Player to Fashion Photographer, how does that happen?
Well, a bit of bad luck really. I got a knee injury and the recovery time took too long. When I recovered (6 months later) things where not the same, so I quit.
I always had an interest in photography since I was a kid, and my father always had cameras lying around. When I finished school I started assisting photographers and realized that this was something I could really get into. For my first job interview I was asked if I could process and print B&W film, I said of course, even though I had never done it before. My cover was blown pretty fast, but my employee gave me a second chance. I spent all of my time processing film until I could do it blind folded. Then there was no turning back, even though now I miss tennis quite a lot. My friend who I used to train with before just won the Wimbledon in doubles for the second time in a row…
Click HERE to read the full Dusan Reljin interview on models.com
75
SHARES
ShareTweetPinterest 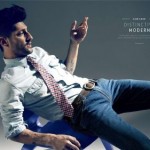