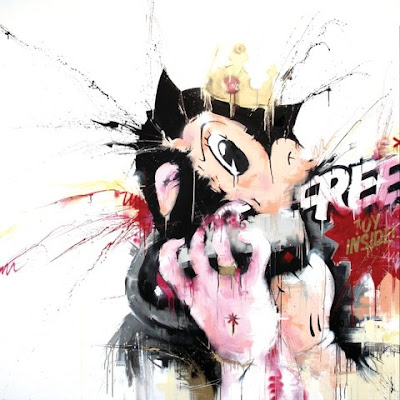 The thirteen artists in ‘Urban Myth’ make their mark wherever possible, creating atmospheric artspaces united by unique visual languages, quirky characters and colorful, dynamic compositions. Using any combination of stencil and freehand painting to create images, these urban artists have been pushing the role of the artist as social commentator and encouraging reconsiderations of art and society for the past twenty years. Graffiti artist Chu creates large-scale works which encourage the viewer to see the world as your studio. Steff Plaetz is one of the original three Scrawl Collective members Plaetz’s instantly recognizable works are among the first generation to pioneer the use of rough sketchbook drawings in finished pieces of art. Pure Evil, street artist and gallery owner, is interested in media-powered communicating with peers through his spectacular works. Andy Council straddles the worlds of street art and illustration, creating distinctive ‘city creatures’ resembling dinosaurs and gargoyles based on architectural features found in Bath and Bristol.
On view in Gallery two, ‘Crime & Charity’ a selection of mixed media on wood works by MEGGS, one of Australia’s pioneering street to gallery artists. Pop culture references tinged with nostalgia for childhood heroes and villains, Meggs’ eclectic works explore the notion of duality and the on-going question of morals, rights and authorities. Reflecting on personal experience, Meggs produces energetic depictions of heroes, villains, and subverted collages of pop culture symbology. In ‘Toy Boy’ a cartoon mouse implodes with the pent up energy of a marble furiously swirled inside a can of spray paint. In ‘Love, Hate’ comic book word bubbles declare ‘It’s happened ! The time has come !’ as fists pound through bloodied layers of amputated imagery in an unholy alliance of Pop and abstract expressionism. Meggs’ work has been exhibited internationally and is included in the National Gallery of Australia’s permanent collection.
C E R A S O L I gallery is located at 8530- b Washington Blvd. Culver City, CA 90232, and is open Tue-Sat 11am – 6pm. For additional information contact,
contact@cerasoligallery.com or (310) 945 5974
Website: www.cerasoligallery.com
*Image courtesy of Cerasoli Gallery
75
SHARES
ShareTweetPinterest 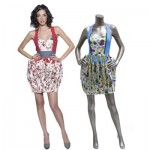 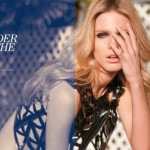