Magazine: V Magazine
Issue: #62
Editorial: The Devil Inside
Styled by Heidi Bivens
Model: Charlotte Gainsbourg
Photographed by Paul Jasmin
Website: www.vmagazine.com
An advance, and also a first preview coming from the new V Magazine, issue #62, set to hit the newsstands November 3rd, featuring singer/actress Charlotte Gainsbourg. Photographed by Paul Jasmin for V#62, nowadays Gainsbourg hardly needs an introduction, Charlotte is the star of Lars von Trier’s domestic drama-meets-horror film “Antichrist” opening this Friday in US theaters. She collaborated once again with AIR, this time on their new album "Love 2", while her new album “IRM” co-written and produced by Beck is coming out January 2010. To add to her already filled up schedule, fashionista's will get to see her once again as front of Balenciaga, in the upcoming fragrance campaign. View more from V magazine's "The Devil Inside" featuring Charlotte Gainsbourg under the cut: 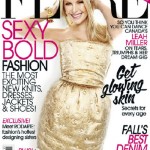