Ray Caesar’s elegant and haunting work takes a delightful direction in “Turning Point,” his exquisite digital rendering of a woman with her parasol strolling amidst flowers in full bloom. Her profile echoes with each turn of her delicate figure. Alternately, Los Angeles artist Cleon Peterson paints a swarm of deviance in “The Mess.” Known for his “anxiety-ridden dystopias where corruption and injustice plague the social order,” Peterson’s desperate characters struggle for power and control over their environment in a scene loaded with sex, drugs and violence. Internationally-renowned UK street artist HUSH brings an urban edge to the exhibition with his piece “Dark Dancer,” in which a female figure appears still, yet her hair and clothing are adorned with chaos and flux. 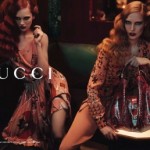 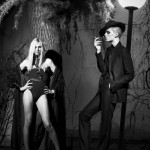