Calvin Klein Collection men's design by Italo Zucchelli and women's by Francisco Costa meet in the new campaign starring Vanessa Axente and Clark Bockelman. Breakthrough stars on the modeling scene are photographed for the new campaign by the famed Mert Alas and Marcus Piggott with creative direction from house's Fabien Baron.

In charge of the styling was Ludivine Poiblanc, hair styling courtesy of Paul Hanlon and makeup by Mark Carrasquillo. Set designer hired for the task is Stefan Beckman.

Clark is represented by top modeling agencies such as d'men at d'management Group in Milano and Wilhelmina Models in New York. While the gorgeous Vanessa already a top model in her own right, is part of DNA Models in New York, Why Not Models in Milano, Viva Model Management in Paris and London. For more of the men's ads log on to our Male Model Scene. 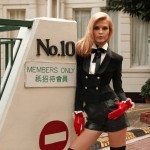 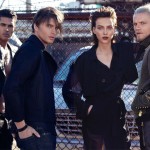