Lanvin enlists fashion photographer Tim Walker to capture their Fall Winter 2014.15 advertising campaign staring supermodel Edie Campbell joined by her family. In charge of styling was Jacob K, with hair by Malcolm Edwards and makeup by Lucia Pieroni. Filmed and edited by Guy Stephens, with creative direction from House and Holme, Ronnie Newhouse and Stephen Wolstenholme. Set design is work of Emma Roach. 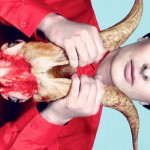 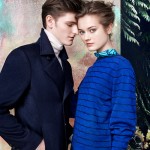