In February of 1947, the crème de la crème of Paris haute couture have flocked to see Christian Dior’s debut fashion show. In a flurry of corolla shaped skirts, the parade of models file down the runway and the mesmerized audience declares the show a triumph. When Clara—a freshly hired chronicler and guide to the busy corridors of the brand-new fashion house—is hand-picked by Dior to be a model, she knows her life will never be the same. A biography docudrama that marries fiction with the story of one of the greatest couturiers in history, this work is a breathless and stunning presentation of Christian Dior’s greatest designs, beautifully rendered by bestselling artist Annie Goetzinger. – from NBM Publishing

Goetzinger is already known on the scene for her best-selling graphic novels Marie-Antoinette, as well as Agence Hardy. Girl In Dior was initially released in French, now also available as an English version.

For more of the book continue after the jump: 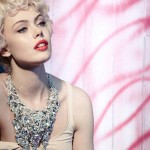 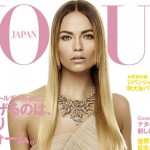