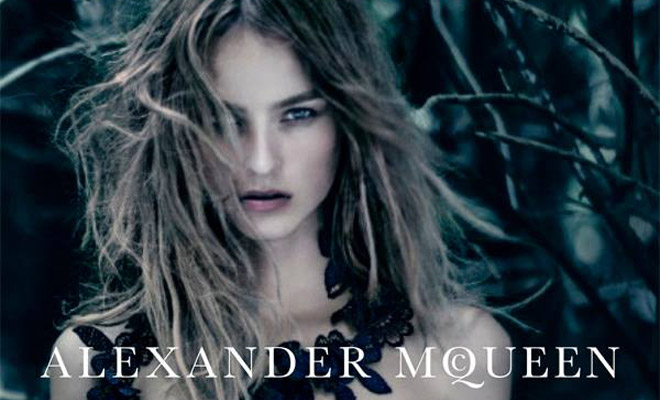 Alexander McQueen introduces McQueen Parfum (their first fragrance since MyQueen back in 2007) that was made from the essence of three night-blooming flowers (Sambac Jasmine, Tuberose, and Ylang Ylang). Perfume was designed for night lovers, for an intelligent and powerful woman whose beauty emerges from the dark. The campaign was shot in forest of Fontainebleau, near Paris by fashion photographer Paolo Roversi, and it stars top model Maartje Verhoef in a dress created especially for the advertisement, that resembles a garland of black flowers twisted around her body.

“McQueen has created a unique scent, one that gives strength to your imagination. It is made from the precious essence of three night-blooming flowers, a parfum that unfolds the mysterious power in you. Uniquely McQueen.” McQueen Parfum can be found at Harrods (350 euros, 50-ml), as well as in McQueen’s flagships in London, Paris and Monaco and on McQueen’s website –  alexandermcqueen.com