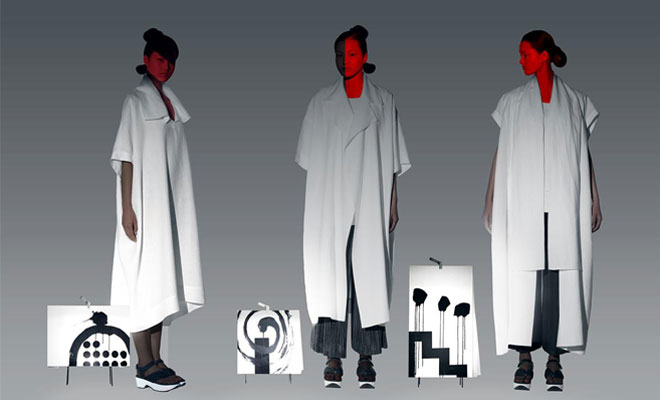 We will release the second volume of the IKKO TANAKA ISSEY MIYAKE collection featuring motifs from the works of Ikko Tanaka, a renowned graphic designer who had a major impact on the history of design around the world. It debuted in 2016 as an expression of Issey Miyake’s respect for Tanaka’s works and his gratitude for the many inspirations. The size and colors of existing examples of the original works were faithfully replicated. However, the objective was not to use these works simply as motifs; rather to create vibrant clothing full of energy to intensify the appeal of Tanaka’s works when worn in a three-dimensional format. This time, two series, Face (1995) and Bokugi (1996), have been chosen as motifs. Natural materials were used to express the world view of Tanaka’s works and the variation of the material for the pleats has been expanded. In selecting the materials, we have contemplated the actual works in earnest and considered how to make their appeal blossom in the form of clothing. This collection embodies the joy of making things. This is something that has been passed down from Ikko Tanaka to Issey Miyake and his team as well as all people engaged in making clothes. When that joy connects with the person wearing these clothes, we hope that the real vision of the ideal form of design will manifest itself. – from Issey Miyake