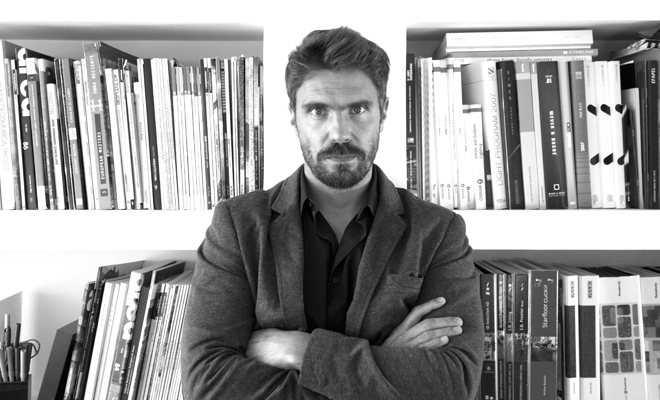 We venture into the architecture scene once again for this issue with our ARCHISCENE contributing writer LAURA VANAGAITE sitting down with architect PAULO MERLINI for an exclusive interview to talk about inspiration, architecture in Portugal, and future plans.

How long You’ve been working in the architecture and design field?
Officially I work in architecture since 2007, when I opened my office. I graduated at Universidade Lusíada do Porto in 2006 and opened my office the next year. But anyway, architecture as any field of knowledge is a continuous process, so I guess I’m working architecture in my mind since always. As any of us for that matter, if you think architecture represents more than 90% of the city surroundings nowadays.

Read our exclusive interview from DESIGN SCENE Magazine March 2017 edition after the jump:

Could You share with our readers something more about your beginnings,  what was the hardest part after graduation?
For me, the hardest part was the beginning. When I started my graduation I hadn’t the slightest clue of what architecture was. I was a formalist as many of us are when we get our first architectural love crushes. We fall in love with the form of other architect’s buildings. It took me three years to understand that architecture is not about form, well of course form also fulfills an important role but it’s only a mere fraction of what architecture really is, but more about the incredible importance of making people happy and to live a higher quality life.
I’ve only felt in love with architecture when I understood it’s complexity, it was like a glimpse, and I remember like it was yesterday. I was in economy class thinking about the project we had to develop that year, an auditorium and music school, I was sketching suddenly everything came to mind like it has become clear at last. Architecture is like a rubrics cube, every little cube it´s like a specific problem, space, light, economics, form, the correlation between spaces. I fell in love at a glance, like when you see the women of your life and in a second you know that’s her.

The most interesting thing that You have learnt from being an architect?

The most interesting thing I’ve learned about architecture was the perception of its incredible social influence and consequent relevance on people happiness and well-being. Architecture has indeed the ability to change the world. I can give you an example at a very small scale. Imagine you are drawing a house to a young couple that just had two small babies, they’re asking you to draw the house for their future life where their kids will grow. The way you draw the house it’s of major influence in this family relation. Imagine you draw two big rooms for the kids where you can fit the bed and all the obvious needed furniture that comes with it, and you leave enough space to put a desk for studying in which room. What will naturally happen is that the two of them, if they have a room where they can fit their “world”, they will get used to constructing their own independent reality, apart from each other. But if on the other hand, you draw small rooms and a common study space, they will get used to the other one presence, exchange ideas, moments, and most probably interact much more in the future. Drawing a house, it´s an incredible responsibility and it should never be taken lightly, and never ever influenced by an attitude of personally disconnected ego concern.

In your career, you have done a lot of projects which include not only architecture, urban projects, but also interior design solutions. Which project was the most memorable in Your career?
I truly hope that the most memorable project in my career is yet to come. (smiles) But about the ones I’ve already done I think that, because at the office we don´t see our intervention as the mere attitude of creating an architectural piece and leave the set, maybe the BAKERY was the first project that showed me that my intuition was right. You see, either we like it or not when you have an office of your own you have a company, and every company has a product, service or commodity to sell, and if you don´t sell it your company will not survive. Architecture it´s the architectural studio product, and as every company, it must be created with passion, organization and it must be shown to the world. You can have the most revolutionary product in the world but if you let it on your socks drawer it won’t help anyone. Just look at Charles Darwin example, it has had the theory of natural evolution insight in his mid-twenties, but he showed it to the world more than twenty years later, and only because Russell Wallace sent him a letter asking his opinion about an idea he had had, that was nothing less than the theory of the evolution of the species. So, If architecture is your product just look at the organizational structure of the great product companies. They have every kind of departments, creative, innovation, marketing, sales etc. Integrate it in your own company, in your own way, and at your own scale and you will be much more successful on spreading your products that are nothing more than ideas crystallized in a form. And don´t be mistaken, people instantly know a good idea when they see it, so it is important to show your work to the world and let them be the judges.

As an architect, do You have any inspirational designers that You like to look after them and learn from them?
Of course, I have designers I admire. There are incredibly creative and intelligent people everywhere, every day I found unbelievably creative people. I´m completely fascinated by the incredible luck I have of being alive in an era that you have access to any kind of information you want in a matter of a click. Just press search on your cellular phone and one second later the world is throwing all its knowledge into the comfort of your couch. I do this on a daily basis, every night I go to bed looking for great minds does feed mine. I find them in every field of knowledge, from architecture to neuroscience, to physics, entrepreneurship, sports, you name it. When I find a fascinating mind, I absorb everything I can about it, I watch every video, documentary, book and all that I can about that person mind. Then, when I feel I’ve already perceived the basis of his or her thought I move to the next one. It is not a conscious process it just is, and it gives me an immense amount of pleasure to do it. So objectively, if you find that designers are creative and that creativity is the most important feature in any field of knowledge, being that “creativity is intelligence having fun” as Einstein put it, yes, I have a lot of inspirational designers I look after on a daily basis.

How would You describe architecture and interior in Portugal? Does it have a very significant look, which would be noticeable to people from other countries?
I´m more informed about architecture than about interior design per se. That’s my formation. We have a lot of interior design projects, but that’s mainly because of these two main reasons. One, I started my office in 2007 and the international economic crisis started a couple of months later so, people that had jobs for decades became “free” to start new projects, like the store they always dreamed, the restaurant they always wanted etc. There was a lot of search on this kind of program and in a way, the available market defined us in this beginning phase. On the other hand, construction from scratch has a much more time-consuming licensing and bureaucratic process, and because we’re a young office most of our finished works, and consequently known works, are interiors. But I still think as an architect when creating interiors, that’s my formation. But yes, Portuguese architecture definitely as a specific line. That’s due to the way culture processes. People get their own ideologies from the ideas that they’re exposed to, for acceptance, transformation or rejection, but people’s ideologies are always assembled over the ones of others before them, the ones you got exposed to.

What is the most typical style that Portuguese now use for their houses and interiors?
I don´t think there is a typical style. Have I’ve said in the last question it’s a question of personal taste and personal narrative reasoning?

Usually designers already have in their minds how they would build their own houses, lives. Do You have that dream house sometimes appearing in Your dreams and how would it look?
No, not really. All I know is that it has to be very much related to nature, almost fused with it and that I must have a place drawn for promoting in the best way possible one of the things I most take pleasure in life. Thinking.

What are the future dreams for your career?
I think that like everyone that loves what he does I would like to be widely recognized by my work, and positively influence as many people as possible. Not because of an ego thing, but because it means that when you achieve the positive global recognition it means your ideas made sense to a lot of people.

Ideas are like a virus, a virus is bad but some are good and of great importance for the all ecosystem, there are even theories defending them as the main responsible for evolution. If you think of global culture as a giant organism and if this organism haply absorbs your ideas, it means you positively influencing it. I believe that this is one of the greater achievements a person can aspire to.

Follow our contributor Laura @laura.vanagaite and www.behance.net/lauravanagaite, while for more of Paulo’s work visit paulomerlini.com.