Today the house of Fendi is synonymous to Italian fashion industry but also the city of Rome, we celebrated this iconic fashion name with an exclusive photographed for our DESIGN SCENE Magazine May 2017 cover story. In most cases when you think of Italy and fashion you think of Milan, however Fendi has a rich history that began in the Italian capital and to this day it still unfolds in that magical city. For the Fendi name it all started in 1925 when Adele and Edoardo Fendi opened a fur and leather shop in Rome’s Via del Plebiscito. Close to a century later Fendi stands as a landmark of the city, with it’s new white marble headquarters in the historic Palazzo della Civiltà Italiana. The building itself shows the true power of the fashion house and it’s name, celebrating the strength of Italy’s fashion industry. Today thanks to Fendi’s legacy the marble tower is seen in a new light, erasing the fact the building itself was often connected in a negative context to Benito Mussolini and thus forgotten and neglected for decades past. Nevertheless, Silvia Venturini Fendi and her team took a risk which set the new meaning for this structure as well as Rome fashion.

“Take the best element of the past, without getting to hard copied references and create something from our days.” said Karl Lagerfeld, continuing to explain the Spring Summer 2017 collection “I think Fendi Roma has to be very Italian”. The collection mixes a fuse of enticing patterns, an apron inspiration, sportswear and embroidery. If anything Silvia and Karl set a new standard of the sport’s heel (trying on one of these light sport heels is worth a race to the Fendi store. Is it a shoe? Is it a sock?). While the apron itself is far from the 1950’s housewife’s idea of the same, if anything it triumphs over the past with an empowering sentiment of feminism, making you realize eons later the inspiration was actually a real apron! The story of Fendi would hardly be the same without Silvia Fendi’s design partner, Karl Lagerfeld. The iconic fashion designer is as he often admits so recognizable the he himself draws a caricature of his self-portraits. Yet, Fendi is as much as part of Karl’s DNA as he is the part of this marvelous house. It all started over fifty years ago, when Fendi sisters invited then young designer making waves in Paris to breathe a breath of fresh air to their business in Roma. With more than half a century to this day this is a truly longest collaboration in fashion history, which with Lagerfeld’s tireless spirit is well to go on for many years to come.

“We were very much inspired by a legendary woman, Marie Antoienette, the collection that is based on opulence, femininity, but also on contrasts and incredible accessories” says Silvia Venturini Fendi while speaking about this season’s collections. Those accessory department, while the design task is not clearly divided, is the stronghold of Mrs Fendi. If anything in the last two decades she’s to take credit for some of the most iconic handbag designs, which in its own right gave a new definition to the family business. While the house was often connected to fur coats, creating a series of iconic handbags designs was certainly Mrs Venturini Fendi’s legacy and has indeed shaped the course of Italian Fashion scene. The FENDI Peakaboo and the Baguette are perhaps some of the most celebrated but almost copied designs of the fashion house, followed by the Fendi 2jours and 3jours designs. The fact these designs were copied to infinity by numerous fast fashion clothing giants as well as counterfeiters shows the true strength of this fashion empire. Even against these blatant copies, a true original is still a coveted and treasured item. Still, circling back to the city of Rome which indeed is giving strength to these collections as well as Karl and Sivlia who decided to celebrate the city only a few seasons back. Unlike the epic show at the Great Wall of China, the timing was right to remind the world of the label’s home town. Lagerfeld who’s hardly shy of a fashion show spectacle has teamed up with Silvia Fendi to create a runway moment ready for history books. The iconic Trevi Fountain of Rome, was the place of the show, which happened in the fountain itself. Thanks to a glass floor, the it girls and top models walked in the latest Fendi designs. The couture collection showed the everlasting spirit of the design, but also placed Rome once again on the map, and for one night Fendi ruled the ancient Rome.

Earlier in April, we ventured to Italy ourselves to shoot the spring summer 2017 collection, classical yet effortlessly modern pieces and Karl’s cascading aprons were photographed for us by Marco Falcetta. A photographed known in Milan for his edgy styled who worked with our team to capture the athletic spirit of the designs modeled by the promising Aneta at MONSTER Models in Milan. For our Milan Fashion Editor Emily Lee it was important to cast a truly promising face on the scene, the young Aneta elegantly in captured the vibrant moments of the collection, giving it a summary glow with a racy heartbeat. The summer in Milan came earlier also thanks to our hard working hair and makeup team, Alessandra Angeli who was in charge of the makeup and Barbara Bertuzzi who shaped the lush summery hair. 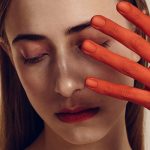 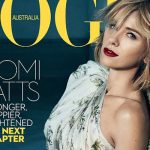