“In Parallels, the narrative is new: scenes are captured inside and out of a Modernist home – a resolutely real space, the photographs imbued with an intensity and intimacy. Yet Chastain’s presence, her own persona, causes us to question the images – are these portraits of Chastain, or a character? Is she playing a role, or playing herself? Reality here runs parallel to fantasy.” – from Prada 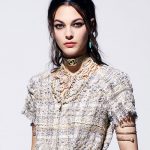 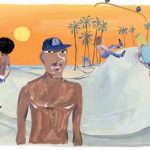