A|X Armani Exchange is back in the spotlight this week with it’s much talked about campaign starring Cara Delevingne and Martin Garrix as well as the UK relaunch with MAINLINE MENSWEAR! The relaunch puts A|X back on the British isle, Armani Exhange products have previously been unavailable to purchase from online retailers in the UK.

Mainline Menswear is enlisted by A|X as the official launch partner, bringing 150 styles from the new collections. The relaunch collaboration kicked off on July 17th, showcasing pieces from summer and autumn menswear collections.

In the coming season Mainline is to also focus on the upcoming menswear collection which come with the new daring and fun energy. The faces of the new collection embodying the dynamic spirit of A|X are Cara Delevingne, the 24 year old British actress and model (starring in the now released Valerian) joined by the number one DJ, the 21 year old Martin Garrix. In addition to Cara and Martin, Chinese singer and actor Li Yifeng is taking on the international campaign in Asia. Mr Giorgio Armani himself was in charge of the new imagery marking this exciting new relaunch for the fashion label. Mr Armani shared: “For this campaign, I wanted three faces capable of recounting the individualist A|X spirit in a novel, unconventional way. Three different and surprising individuals, all creative and free in their expression and whom I wanted to envelop in Armani style. Cara Delevingne is an irreverent, chameleon-like character interpreting different aesthetics and philosophies; Martin Garrix, who is capable of making magic with music; and Li Yifeng, a multi-faceted talent who speaks to a vast audience. A|X is Armani style in its most metropolitan, free self just like my three testimonials.” The relaunch with MAINLINE MENSWEAR in the UK as well as the new campaign are a clear sign of this fashion labels continuing expansion. The Armani Exchange brand started in 1991 as American endeavor of it’s creator Giorgio Armani, focusing on denim and active-wear primarily. The re-launch is following Armani Group‘s reacquiring of the youthful fashion house, in a new strategy to revamp it’s brand portfolio. The focus of the Armani Group is to allow growth of A|X and re-position as the symbol of Italian streetwear, part of this plan is the project with Mainline Menswear becoming the Official Launch Partner for the United Kingdom.

Mainline Menswear story started fifteen years ago with a small shop in the seaside town of Scarborough. Today this British retailer offers one of the largest comprehensive ranges of men’s designer clothing in the UK. In addition to A|X Mainline also works with Armani Jeans, Moschino, Hugo Boss, Fred Perry, Nike and Vivienne Westwood to name a few. Since Monday, thanks to this collaboration A|X is back on the UK market, as Armani’s more accessible as well as affordable line. 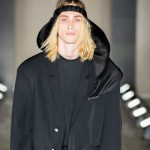 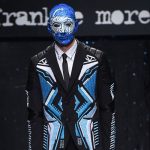