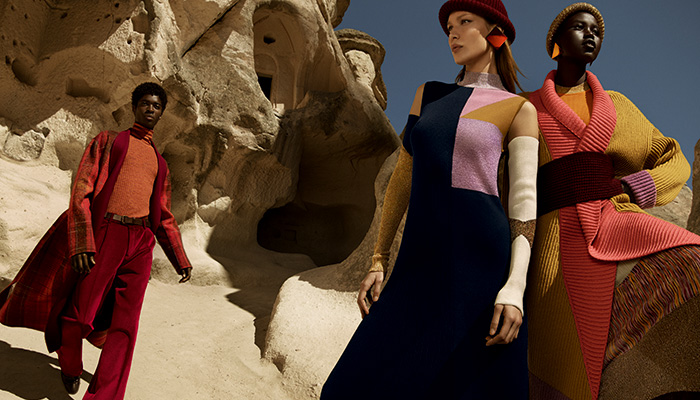 “After shooting their first campaign together back in 2001 at the beginning of their extraordinary career, Mert & Marcus under the creative direction of Angela Missoni shoot the latest Winter 2019 campaign in Cappadocia, against the surreal volcanic landscape of spired rock formations known as the fairy chimneys.

This arid and beguiling moonscape becomes the stage upon which an exhibition unfolds of long, form-fitting dresses in black-and-white or colourful graphic motifs, vertical bands, geometric forms, and sophisticated monochromatic hues. Outfits from the Missoni and Missoni Man collections are worn by supermodels Bella Hadid, Adut Akech, as well as Alton Mason and Dong Su Moon; appearing as magical creatures, supernatural apparitions silhouetted against the terrain and intergalactic travellers caught up in unrevealed and mysterious scenarios.“