During the January 2020 menswear fashion week in Milan our editor KATARINA DJORIC sits down with Milan fashion scene’s breakthrough star MARCELO BURLON for an exclusive interview. Katarina talks to Marcelo about his beginnings, the club scene and trusting your instincts.

Tell us about your beginnings? You come from Argentina, but you moved to Italy, right? – Yeah, I’m from Argentina, Patagonia, coming from Italian and Lebanese family. I was born in a hippy village, in Patagonia. It’s a very special area of Argentina, surrounded by lakes and mountains. When I was 14 years old my family moved to Italy, to Riccione area, known for its vibrant party scene in the ’90. People were coming from all over the world there to party because the best clubs were there.  The club goers would always make a huge effort to have the best outfits. The textile industry was also in that area, so we had Marc Jacobs coming there to produce his collections, Jean Paul Gaultier and other designers.

Is that basically how you’ve got interested in fashion? – I believe so. I have been wearing Gaultier regularly and I had long hair back then. It was the time before social media, so you had to be really around to be seen. I wanted to work in fashion so in 1998 I moved to Milano, but didn’t know what exactly at the time, so I started modeling.

There was no social media at the time, so the club used to be the place where you can meet everyone. Today you meet everyone on Instagram, but then it was clubbing.

I guess clubbing was a great way to connect with people back then? – Yes, I met a lot of people through it.  When I got to Milan, I was the head of this very important club on Friday night, to which everyone from fashion used to come. I was at the door, welcoming everyone.  I met everyone from Ricardo [Tisci] to Dolce & Gabbana who I worked for one year. Dries Van Noten used to come and also Raf Simons. We used to make special parties with Raf. It was really a sparkling moment for Milan. Through clubbing I also got to meet Alessandro del Aqua, for whom I worked on celebrity PR for a few years.

In some ways the club scene was the starting point of influencer culture? – For my entire life I work with a very specific type of people, so yes the ones that call themselves influencers today. There was no social media at the time, so the club used to be the place where you can meet everyone. Today you meet everyone on Instagram, but then it was clubbing.

How did you use the connections you made at that time? – I think that’s why I decided to launch my PR company. I knew a lot of people, I was in the middle between the audience and the clients [the brands]. Soon after starting my PR company I did the Gucci party, Versace party… I was the one connected with the brands, so everyone who wanted to launch something, a perfume, to open the store, they used to call me, because I had the best people in town. That means a very versatile type of people. At that time in Milan, bourgeois people used to hang out only with bourgeois people, the fashionistas with fashionistas, street kids with street kids. When I got here, I brought everyone together and something changed.

My first big event was for Giorgio Armani, I organized their 25th anniversary party. They called me because I knew all the cool kids. I brought the drag queens, the graffiti artist.

I guess a brand as traditional as Armani was longing for a new audience? – Yes, they needed to feel more international, more inclusive. So that’s why I let everyone be a part of this at the time very exclusive party.

You do still throw an amazing party! – I guess so and I kept doing this party thing for years. Well you know, you were at my party last Saturday.

I have to say your parties are the highlights of FW’s nightlife. I hope you keep making them every season.  – Yes, I will do this forever, it’s in my DNA. Ok, not forever, I don’t want to be a 50 year old DJ. [laughs]

After starting your own PR business for a while you also had your own taste of the publishing world? –  This came with the launch of the Rodeo Magazine, which was a supercool magazine and it was free. It was a beautiful experience. The content was really strong, we had a very nice crew working on a magazine. But at the same time I still used to make parties, because that was my thing.

But this is also how you got into fashion design, you started with t-shirts? – Before that I became a DJ and started DJing all over the world, especially for fashion parties. But I became a ‘fashion DJ’.  It was the beginning of social media and I realized I am getting a big following. I was playing in Moscow, and the lot of kids came to see me, then in New York as well. I was like, I’m going to launch my brand. I felt that they want to be a part of my world in some way.

Soon after Pusha T wore your T-shirt. – Yes, he wore the wings t-shirt when we launched at Art Basel Miami. The brand and the following grew short after. And then we started a New Guards Group. I brought Virgil [Abloh] here, we launched Off White, then Francesco [Ragazzi] came over and we launched Palm Angels, also Heron Preston. And then we sold the company to Farfetch.

Is it more of a pressure for you now? – Not really, I’m still an employee. We sold the company, but the brand is still mine. Nothing really changed. Of course they need me, because the brand without me wouldn’t exist.

Tell me about the SS20 collection. What was the inspiration while creating it? – With this last show something changed. I don’t know if it was me, or something else, but something definitely changed. The brand reflects me, and all my experience working 20 years in fashion and organizing events. This collection is inspired by psychedelia, distortion, some elements of folk, which is part of my DNA, there are a lot of Argentinean symbols.

The symbols you’re using have a deep meaning for you and come from your roots?  – Yes, the full cross is the key of the universe for Patagonia natives, it describes their geographical origin. It represents mountains that reflect in the lakes.

When it comes to shows your casting is always very unique. – We always try to make something special with casting. We try to bring the minorities, Afro-Italian kids, albinos, transgenders, and so.

It looks like they own the pieces somehow. – Yes, we also create the styling around the faces and characters of the models.

What about this season’s set design? Why blue? – We started working on a blue room in July last year, and in October Balenciaga did something pretty much the same, so we had to change the concept, we were on the same page. So we came up with the blue planet.

It also reflects the current ecological situation. What is your take on sustainability in fashion? – The brand is a big machine, to change those kinds of things you need time. Step by step we are changing things and trying to be more sustainable. It looks so easy, but it’s not. The whole industry needs to change.

How do you feel about luxury brands doing streetwear now? – Well that’s what the market needs. Everyone tries to fit in. I don’t mind that they are doing it, that means we were right. And if you think about streetwear, what is streetwear really? It’s a combination of different things. You can wear thousands of euros worth jackets paired with 50 euros jeans.

Marcelo is a guy who became a brand, and then you are a brand, not a person

Brands like yours actually influenced them to start doing streetwear. – I believe so, they are trying to assimilate what we were doing. At the beginning when I was climbing up the ladder, people from luxury companies started asking around how I am doing it, who is behind Marcelo. And it was nobody. If you want to do something like that you have to be a little different. Marcelo is a guy who became a brand, and then you are a brand, not a person.

And after all this to this day you say for yourself you are not a fashion designer. –  I’m not. I never studied fashion design. I drive my design team through my experience and my inspiration, so they translate it to clothes. Sometimes I’m right, sometimes not. With this collection I was right, especially with the pied-de-poule pattern. I wanted to do it for the last 3 seasons and they wouldn’t let me. This time I trusted myself, and finally we did it and people loved it. Maybe it wasn’t the right time.

I never studied fashion design. I drive my design team through my experience and my inspiration, so they translate it to clothes.

Maybe you were ahead of your time. –  But maybe it was also too early to show it. Sometimes you do something and people don’t get it immediately but after 2-3 years.

Do you ever feel bad when you see a fast fashion brand copy your design? – There are so many copies of my graphics. We have a legal office that takes care of that. But big brands also do that, we won a lot of legal suits. They try to follow the trend but they get lost and at some point and it becomes stealing.

What about collaborations? – The collaborations are something that I’ve been doing since the beginning. From Borsallino hats, to Kappa tracksuit, Reebok sneakers, Starter caps, Chris Shabanna jewelry, Swarowski, Disney, NBA, Moet Chandon,Timberland, and now we did Retrosuperfuture sunglasses. There are few coming with pre collections.

And for the end, could you recommend some good music to our readers. What are you listening to at the moment? – Italian rap, Marakesh, he’s an amazing rapper. I listen to a lot of boring stuff, Nina Simone, for example. Old people stuff. I started collecting vinyls, so now I’m in the ‘70s era, like Pink Floyd. I have a house in Ibiza and I collect the ‘70s stuff from all over the world. And in my house in Argentina, I keep all the Argentinean artists from ’70, it’s very psychedelic and rock. Music is a part of my DNA and my daily life. I’m starting a radio show in Ibiza in May. Every week there will be a 2 hours live stream from my house, with guest DJs coming to play and talk. It’s something I always wanted to do. Something like ’90s radio shows. 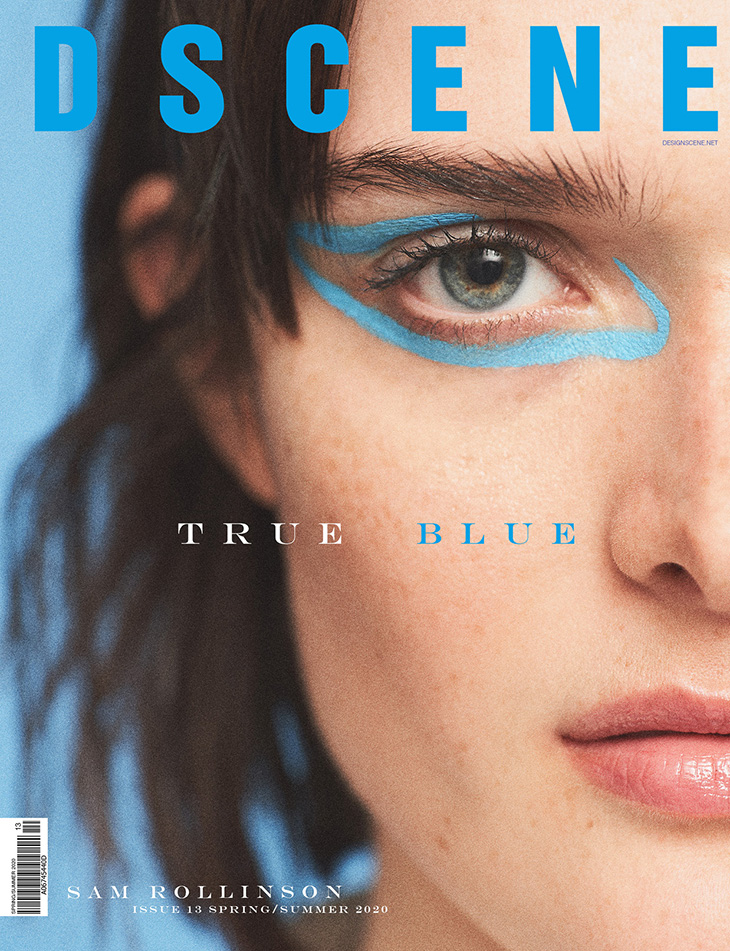