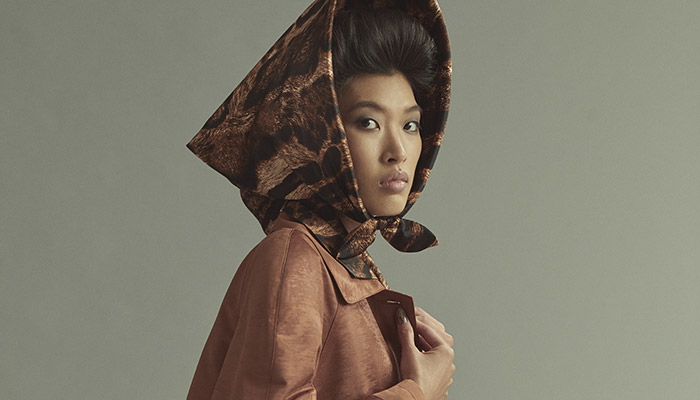 Discover EDWARD CRUTCHLEY Fall Winter 2021.22 Collection that pays tribute to the cultural iconography of The North of England, presented today at the ongoing London Fashion Week. The collection that explores personalities loved for their straightforwardness, communicativeness and humour, is named FLORIZEL – after the original title for the British soap Coronation Street. The collection is a character study of northern grit and glamour.

“Colours riff off the cusolic northern landscape and hardy English textiles are reproduced with a luxurious, couture handle. A contemporary cashmere tweed and leopard merino jacquard from Johnstons of Elgin are the apogee of Bet Lynch meets b-boy style. Two damask prints featuring the ED wheel logo and a plumage of ostrich feathers are based on 1820s designs from the textile printing museum in Mulhouse, France. A lush ornithological print featuring crows, pheasants and foliage is an amalgam of works by the famed naturalist John James Audubon. Temple frescos on Liugong Island, China – a resting place for British Navy Offiers in the early years of the 20th century – are collaged to create a dense marble throng.

Throughout his career, Crutchley has been committed to an environmentally sustainable way of working the feeds right through the supply chain, fully involving artisans, factories and their suppliers. For AW21 a leopard slug graphic is digitally printed by Biddle Sawyer in Manchester onto organic silk, and also appears in a brand new textile developed to mirror the appearance of moiré. The design is first applied onto a warp of recycled polyester before it is woven in the manner of an old school couture Ottoman fabric in Como by Gentili Mosconi.” – from Edward Crutchley