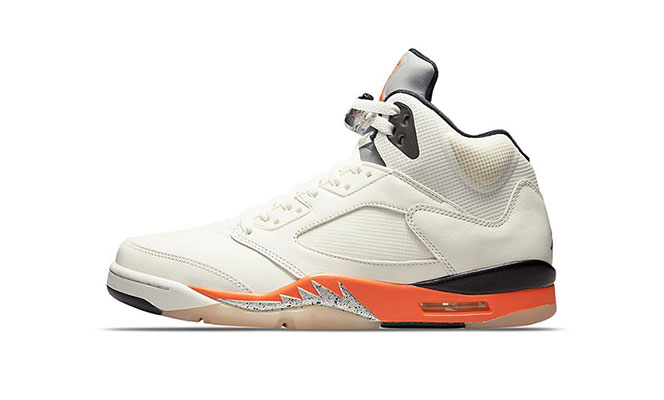 Fans of the Air Jordan 5 will be pleased to know that the “Shattered Backboard” colorway is confirmed to return this October. The sneaker insiders began reporting on the upcoming release several months back, and more recently, we’ve been blessed with official images of the pair, along with a release date of October 2nd.

As a close representation of its 1990s OG release, the Air Jordan “Shattered Backboard” will no doubt register strongly on Jordan aficionados’ radars. Not only does it impress in terms of its OG status, but its retro color palette will definitely appeal to first-time fans, too. Featuring the perfect fall hues, the Air Jordan 5 “Orange Blaze” is ready to light up those crisp nights. Literally – flash a camera against a familiar reflective tongue and it will shine back at you in the dark, leading the way forward.

The Air Jordan 5 Shattered Backboard comes as the latest Jordan silhouette to get the retro treatment, and you will be able to cop a pair soon at GOAT.

The Air Jordan 5 Retro ‘Shattered Backboard’ brings a classic Jordan Brand look to a different classic silhouette. Drawing from the Air Jordan 1 colorway, the shoe’s upper emerges with a white leather base on the upper, sporting textile mesh on the collar, throat and quarter panel, with the latter replacing the usual netting. The reflective silver tongue includes Total Orange Jumpman branding, matched underfoot by the polyurethane midsole, which includes visible Air in the heel for cushioning. A herringbone rubber outsole offers traction. – from Fight Club. The Jumpman logo emerges in silver on the tongue, heel, insole, and outsole, while an Air Jordan tag is stitched to the inside of the tongue.

The name of the colorway is inspired by the  by Micahel Jordan’s 1985 Nike Europe tour. He wore an orange, black, and white uniform, when he shattered a backboard with his monstrous dunk. The sneaker is dressed in off white leather, while the orange shading comes into play via the lining and midsole. Below, the outsole bears an milky, semi-translucent effect.

The Air Jordan 5 first arrived in February 1990, accounting for one of the best-selling Jordans that year. They retailed for $125 and dropped in four colorways during its initial launch.

For this model, the legendary sneaker designer Tinker Hatfield was inspired by the P-51 Mustang fighter jet, an American-made plane used for air raids in Germany during World War II, as well as the MJ’s unique attacking style.

A version of the P-51 jet, featured a cartoonish shark teeth along the barrel of the jet, right by the propeller, on the gray plane. That inspiration is clearly visible on the midsole of the sneaker.

The designer also took MJ’s biting on-court style as the focal point of the Air Jordan 5’s design. He made them to be mainly functional and supportive of the world’s greatest athlete’s feet, but he didn’t forget about the aesthetics and design, that perfectly match Michael Jordan’s mindset.

Since his game-winning shot that brought championship glory to North Carolina, Michael Jordan has been at the forefront of basketball consciousness. He took the court in 1985 wearing the original Air Jordan I, simultaneously breaking league rules and his opponents’ will while capturing the imagination of fans worldwide. – from Nike.

When the original Jordan V colorways started to release in February 1990, they retailed for $125. The four original colorways were white/black, black/metallic, white/fire red and white/grape.

The first model featured a reflective 3M tongue, mesh netting on the tongue and side panels as well as a unique set of lace locks. They were retroed for the first time in 2000 and making this model the first retro of the new millennium. We’ve seen over 40 retro releases, since then, including low tops, hybrids and collaborations.

The Air Jordan 5 “Shattered Backboard” is set to officially release on October 2, for the price of $190 USD. Check out the sneaker release dates to find out what’s coming next. 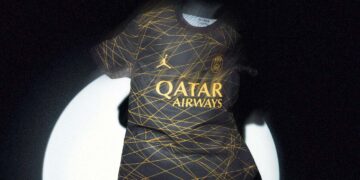 Best Gifts for the Female Sneaker Enthusiast in Your Life