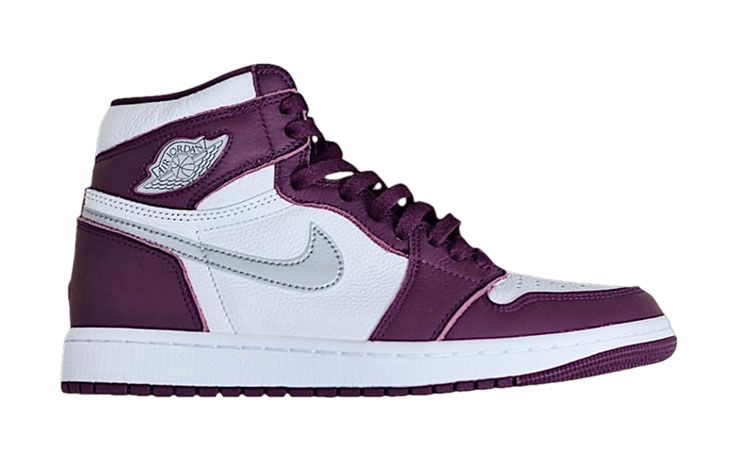 This Fall the Jordan Brand adds a vineyard touch to its highly coveted Air Jordan I OG with the “Bordeaux” colorway. This seasonal take uses a combination of materials and color choices to apply a new twist to the silhouette. It is expected to be one of the most coveted sneakers on the holiday lineup, and it comes in men’s and grade school sizing, as well as the extended sizing for women.

The Air Jordan 1 Retro High OG ‘Bordeaux’ is inspired by the first AJ1, offering fans of Jordan retros a chance to follow in the footsteps of greatness. Fresh color choices and the clean, classic materials are adding the touch of newness into the familiar design. Originally released in 1985 in Black and Red colorway, the Air Jordan 1 is called the sneaker that started it all. When Michael Jordan first showed up on the court in the original AJ1, the shoe immediately earned a legion of fans while kick-starting the history of flight.

The Air Jordan 1 Retro High OG ‘Bordeaux’ comes with a rich colorway. The leather upper has a white base, combined with a Bordeaux leather throughout. The Swoosh sign and the ‘Wings’ logo add a luxury touch in a metallic silver, with a lightly padded nylon tongue. Underfoot, Air in the heel of the midsole offers cushioning, giving way to a concentric rubber outsole for traction.

The Air Jordan 1 Retro High OG ‘Bordeaux’ dresses the archetypal silhouette in a white leather upper with vinous leather overlays at the forefoot, heel and collar. Similar to the CO.JP ‘Midnight Navy’ colorway, the sneaker is accented with a metallic silver Swoosh and a jeweled Wings logo on the lateral ankle. A woven Nike Air tongue tag atop the lightly padded nylon tongue delivers an OG touch. A traditional two-tone AJ1 cupsole packs encapsulated Nike Air cushioning under the heel. – from GOAT.

The one that started it all – the first Air Jordan was designed for Hall of Fame former basketball player Michael Jordan during his time with the Chicago Bulls in 1984 by the legendary sneakers designer Peter C. Moore. The original logo, that features ball and wings, is sketched on a napkin by Moore on his flight back to Portland, explaining that the design perfectly fits the idea of a guy who could fly.

The design of the sneaker itself was based on MJ’s input – he expressed the idea of having “something different, something exciting, and low to the ground”. Moore decided that he will use color as a way to create something different and exciting, dictated by the Chicago Bulls colors – red, black, and white. “That meant that we could have three colors on a single shoe, which in 1985 was unheard of in basketball shoes.” The colorway was outlawed by NBA Commissioner David Stern for having very little white on them – this rule is known as the “51 percent” rule and was repealed in the late 2000s.

“I am somewhat surprised by the staying power of the Jordan 1. It seems every new generation of kids has to try it, almost as if they discovered it.” – said the designer Peter Moore for Complex.

The Air Jordan 1 Retro High OG ‘Bordeaux’ is set to drop on November 20 and will retail for $170 USD at select Jordan Brand stockists, GOAT and Fight Club.

Keep up with the new sneakers releases before they drop.