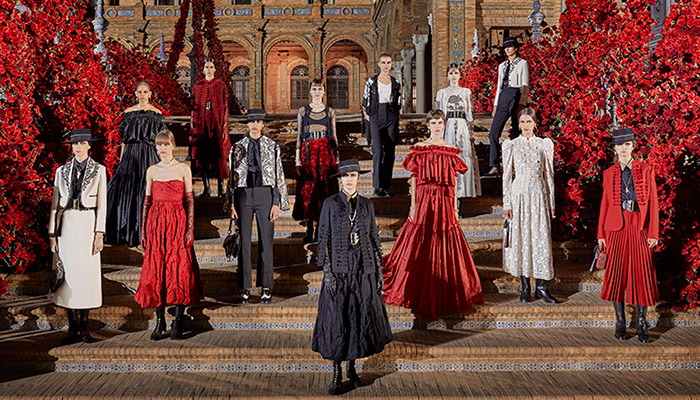 Luxury house DIOR presented their Cruise 2023 Collection, that celebrates the plural visions of femininity and Spanish history, at the majestic Plaza de España in Seville. The icon of this collection is the greatest Flamenco dancer ever Carmen Amaya also known as La Capitana. For the collection designer Maria Grazia Chiuri was inspired by the brand’s Spring-Summer 1956 Haute Couture Bal à Séville dress designed by Christian Dior, as well as with the Plaza de España, and works of poet Federico García Lorca and painter Francisco Goya. The collection fuses imagination with reflection, and brand’s heritage with inventiveness. The show pays tribute to Spanish ferias, from the art of dance to equestrian tradition.

“The emblematic Manila shawl retells the stories and journeys of the communities that created and wore it. The tale of these nomadic objects is narrated using multiple voices: note the men’s pinstripe suits, the pants worn with suspenders, the silk-lined waistcoats; the white shirts; the Andalusian horsemen’s pants; the short jackets adorned with brandebourg closures; the trimmed boleros that make the silhouette even more slender; the sleeves that can flare out like a cape. Shimmering taffeta – in red, yellow, ochre, black – is sculpted into exuberant skirts that symbolize both Dior and Spain. Carefully considered volumes elevate the contrasts; lace appears in manifold forms; the Bar jacket is reinvented in black velvet embroidered with various gold threads.” – from DIOR