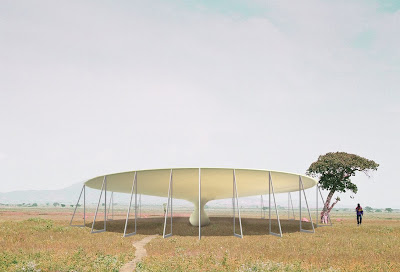 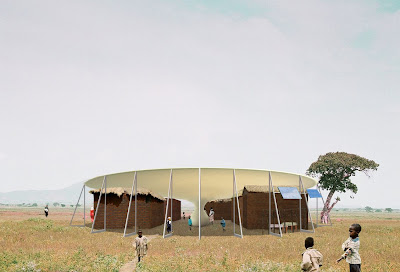 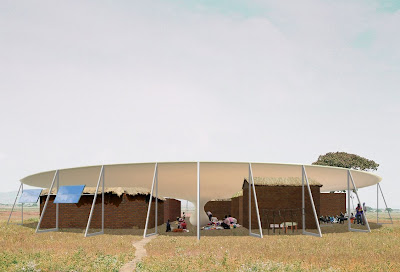 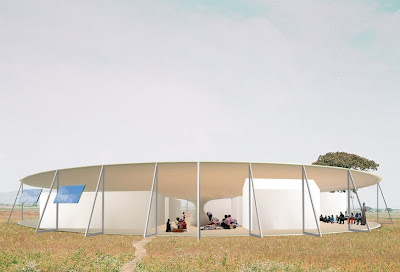 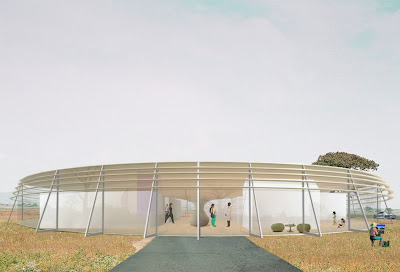 Project: Umbrella
Designed by Visiondivision
Website: www.visiondivision.com
Umbrella project is a competition entry for “Design for the children”, a children’s hospital prototype for rural Rwanda. “Due to our northern location we seldom get the chance to do something for the poorest people on this planet. So when we saw this competition we felt urged to do a proposal. Insufficient water is one of the most severe problems in rural Africa. For many families it is extremely time consuming to collect and can easily start conflicts between villages.
We had an idea that we should create a dew/rainwater collector as a roof and the rest of the building would more or less handle itself. To test the idea we went to the Sahara desert where an experiment with a dew collecting umbrella where sucessfully performed. “
The concept for this new hospital prototype is simple. An upscaled upside down umbrella serves as a roof to a rural built hospital. The umbrella roof is gathering rainwater or dew depending on the location to supply the hospital with clean water. The big umbrella also serves as a light roof giving shadow to the hospital. The umbrella will be a recognizable symbol for children healthcare in the region.
Phase I: The structure is made out of light felt and steel. In the middle of the umbrella shaped tent there is a water container gathering the clean water from the roof.
Phase II: At first the hospital is built as a small village with local materials under the umbrella, the water container becomes the midpoint of the hospital. The hospital gets energy supply from solar panels.
Phase III: When the hospital grows the umbrella can easily grow by adding an outer layer of felt and moving the pillars outwards from the centre point. The different houses expands by mirroring themselves outwards. As the structure grows the water supply surface gets bigger at the same time.
Phase IV: As time goes by, modern materials can be added to improve the village without interfering with the design. Our hope is that the structure becomes a roof for constant developing
Phase V: As a final stage a facade with sun protection can be added, making the building into a modern hospital. It is our hope and belief that the regions in need for this hospital will develop into strong economies one day. This building is prepared to stand in better times as well.
Phase I&II: A cluster of separate buildings is set up around the central water tank .The spaces behind the buildings can be used as
terraces with shading from the roof
structure and as sleeping places for
visitors. A perimeter wall to prevent theft is set up around the structure according to the site. The separate cooking facility and toilet facilities are also chosen according to this.
Phase III-V: An expansion of the hospital is easily done by mirroring the rooms outwards.
The water tank is still the focal centre, but small hallways has now emerged where most of the entrances to the rooms are located, creating more distinct areas of the hospital.
Kitchen facilities and a morgue is located separatley according to the site.
+ more Visiondivision projects on Design Scene
*Courtesy of Visiondivision
45
SHARES
ShareTweetPinterest 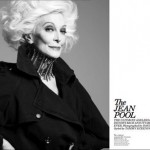 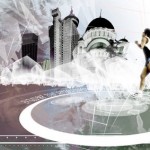