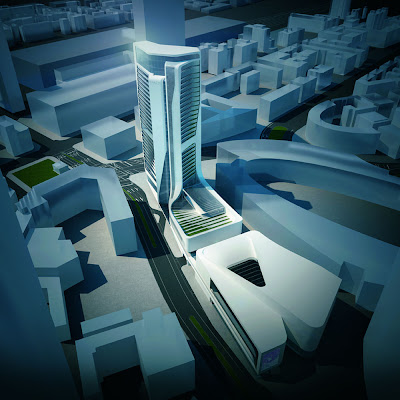 Project: Grand Hyatt
Location: Frankfurt, Germany
Designed by UNStudio
Website: www.unstudio.com
On May 19th, UNStudio was selected in the competition for a 110 meter tall hotel tower. From the six projects presented, the jury, chaired by Prof. Johann Eisele, chose the designs by UNStudio – Ben van Berkel (Amsterdam), and Kohn, Pedersen, Fox (New York) and recommended proceeding with the UNStudio design for further development. The principal and project developer of the project is Vivico Real Estate.
According to Ben van Berkel the design for the Grand Hyatt tower celebrates and highlights the cosmopolitan character and diversity of Frankfurt. ‘It has three different elevations that are linked to the different aspects of the city. The tower takes up the variation and diversity offered by the city of Frankfurt and reflects that multiplicity of experiences back to the city itself. The tower can be perceived differently from each perspective it appears needle-thin from one spot, strong and straight from another, and complex with a slight twist from yet another.”
The new tower will house a 5-star-plus hotel with 405 rooms and suites, a ballroom, spa, various restaurants, a lobby bar and a public Sky Lounge on the top floor, and the possibility of an adjacent congress center. The hotel tower consists of 30 floors at a height of approximately 110 metres and an area of 54,562.70 m2 for hotel tower + plinth. – From UNStudio
90
SHARES
ShareTweetPinterest 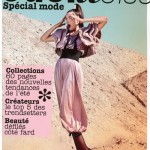