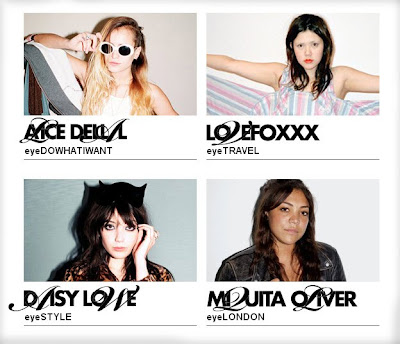 Olympus + VICE Mag: Stories of the Eye competition
Daisy Lowe, Alice Dellal, Miquita Oliver and Lovefoxxx
Date: 11th August – 22nd September 2009
Website: www.viceland.com/storiesoftheeye
VICE have teamed up with Olympus to stage a special photography project that aims to showcase the hidden creative talents of four cultural icons. This project celebrates the 50th birthday of the design of the classic Olympus PEN and to mark the release of its successor, the new Olympus E-P1.
For Stories of the Eye, Daisy Lowe, Alice Dellal, Miquita Oliver and Lovefoxxx will document their lives through the eye of the new Olympus E-P1, according to their chosen themes. Over the course of six-weeks the girls will upload their photos to the campaign’s home www.viceland.com/storiesoftheeye where users can browse the photos.
Entrants upload their own photographs and each of the girls will be judging the submissions to find a winner for their theme. Each winner will be awarded a brand new Olympus PEN worth £699, and the opportunity to exhibit their photos next to Daisy, Alice, Miquita or Lovefoxxx’s photos at the Stories of the Eye exhibition. More info under the cut:

Editors Notes: The exhibition will open with a typical VICE party bang, attended by industry insiders, press and special guests. Date and venue tbc.
The Olympus PEN
In 1959, Olympus changed the face of photography with one simple idea: create a camera as easy to use and carry as a pen. Designed by renowned style guru Yoshihisa Maitani, the original Olympus PEN sold over 17 million units to become one of the most popular and trusted camera series ever.
Today it’s back with the release of the Olympus E-P1. The Olympus E-P1’s small size and retro look and feel nod to the Olympus PEN’s past, whilst its groundbreaking Micro Four Thirds technology enables users to take D-SLR quality shots on a camera that is simple to use.
The Girls
Daisy Lowe- eyeStyle
In February 2006, Lowe was featured in Italian Vogue shot by New York photographer, Steven Klein, who also shot her for the uber-cool W magazine in a feature called “Xurbia”. Daisy has modeled for Urban Outfitters, appeared in French Connection printed advertisements and was profiled in British Harper’s Bazaar.
Lowe featured in an editorial in Jane magazine alongside fellow model Lydia Hearst-Shaw in 2007, appeared in Italian Vogue for the second time in May of that year, and in August posed nude on the cover of i-D magazine. Daisy posed for her second cover of i-D in March 2009 as part of their ‘Best of British ‘ issues. She was also picked by Karl Lagerfeld to catwalk model for Chanel, and has modelled for Anna Sui, Vivienne Westwood, Burberry and Whistles.
Daisy is the current face of iconic British label ‘Converse’, Agent Provocateur and Marc by Marc Jacobs. Daisy is a natural in front of the camera and has the fashion world at her feet. She says, “Modeling is a cool outlet for me to express myself, and fashion has always fascinated me. I love that fashion crosses into my other passions – music, photography and art”.
Alice Dellal- eyeDoWhatILike
Alice Dellal is fast becoming Britain’s most edgy and interesting model. Alice has modeled for Burberry, Vogue, Dazed and Confused Magazine, Agent Provocateur, appeared on Vivienne Westwood’s A/W 09 catwalk as well as the cover of i-D magazine for the ‘Most Iconic British Models’ issue, shot by Solve Sundsbo. Just to add to Alice’s glamorous credentials, fashion designer of the moment Alexander Wang has chosen her as his muse.
Aside from fashion, Alice’s main interest is photography and she jumped at the chance to take part in this project with Vice Magazine and Olympus.
Miquita Oliver – eyeLondon
Miquita started her presenting career at a very young age – she was still studying for her GCSE’s at the time. She landed her first gig in 2000 presenting with Simon Amstell on C4’s flagship music show POPWORLD. The dynamic duo were known for their great rapport and sharp wit and the show won several awards. They presented together for an astonishing 6 years.
In February 2009 she presented the backstage coverage of the NME Awards for Channel 4 and also the FIRST LIGHT MOVIE AWARDS in March in Leicester Square’s Odeon alongside fellow T4 presenter Rick Edwards. Her own 4Music show, THE MONTH WITH MIQUITA, is also shown on Channel 4.
Her interests include art, music, photography and fashion and she lives in Shoreditch, London.
LOVEFOXXX – eyeTravel
Lovefoxx, of Brazilian electro-rock band CSS (Portuguese for “Tired of Being Sexy” – something Beyoncé Knowles once said she was), rose to fame in 2006 with the release of her band’s self- titled debut album.
Lovefoxxx is renowned for her outlandish fashion sense, infectious sense of fun and exuberant live stage performances. She is defined by her creativity – she worked as an illustrator and fashion assistant before embarking on her music career – and CSS’s rise was itself largely down to the help of the thriving creative community and underground club scene in Sao Paulo.
And the media love her too. Lovefoxxx has made it to NME’s Cool List twice – she was voted #10 in 2006, and #3 in 2007. 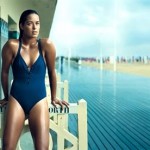 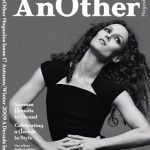