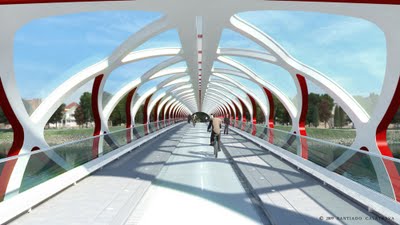 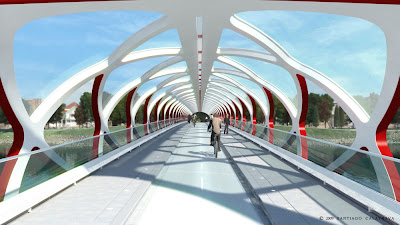 Project: Peace Bridge
Location: Calgary, Canada
Designed by Santiago Calatrava
Website: www.calatrava.com
The City of Calgary Canada has unveiled a new $24.5 million footbridge, designed by Spanish architect Santiago Calatrava. The red and white tubular structure which will span the Bow River and connect the North shore to the downtown, will make it easier for Calgarians to commute in and out of the city by foot or by bike. 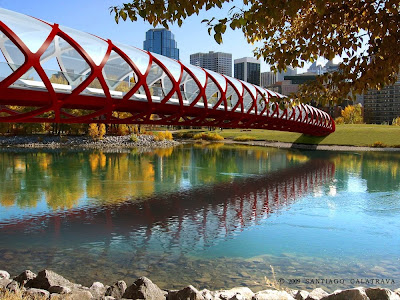 The bridge’s helix design, which has been likened to a Chinese finger puzzle and a candy stick, is a departure for Calatrava, whose iconic bridges are recognizable worldwide for their soaring masts, delicate steel cables and absence of symmetry. But as this bridge had to be designed without piers in the riverbed or vertical elements above, it required a different approach, resulting in its tubular form. Seemingly simplistic at first glance, the Peace Bridge is ‘a highly technical bridge’ said Calatrava, like no other he has ever designed.
Painted a bright Canadian red, the 130 meter long single span bridge will have separate paths for pedestrians and cyclists. It will be covered in glass for year round use and lit at night.
Scheduled for completion in late 2010, the bridge is expected to be used by more than 5,000 people a day.
As seen on World Architecture News.