KATE: I read that you made your first public appearance in a Bob Marley video.

NAOMI: Yeah. I was 7, I think. He was such a handsome man. I remember I started crying when I saw his dreadlocks because I thought they were worms. But he was really, really gentle.

KATE (on ethnic prejudice in the modeling world): When I first got to New York, I was like: “What are they talking about?”. I couldn’t tell, you know. It was really weird and also I think growing up in South London, it’s so mixed race.

NAOMI: Exactly, we just know our area and how we were raised, so it was a big eye opener to me.

KATE: Did it feel like a battle you were fighting? And are you still fighting for equality in fashion?

NAOMI: It felt… I can’t say that the word battle is the right word but it definitely felt like it was an uphill struggle for something. I felt like I had to do what I had to do for my race and to keep awareness out there. 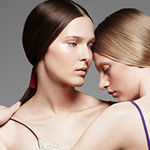 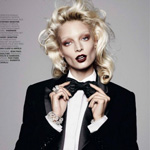