I think this smart 22-year-old is the face of a new generation – she is the woman whose playful attitude is giving London a fresh spirit. When I look at pictures of Pixie, I see a Kate Moss-in-waiting; a stunning cover girl whose personality shines through everything she does. Which is why I chose her for this shoot celebrating British fashion – and her first ELLE cover. She’s spirited and strong, a role model in the making. I predict big things for her. – ELLE UK Editor-in-Chief Lorraine Candy

For more images and highlights from her interview continue below: On her image: ‘When I saw myself at the Met Ball I did think, my god, a grown-up! I was embarrassed by how womanly I looked. Ifind it hard to take myself seriously – and if I was in a magazine posing in a sexy way, my friends wouldn’t let me hear the end of it.’

On the death of her mother Paula Yates: ‘Yes, our mother’s death was a terrible thing to happen to four young girls. We’re not ashamed of it, but everyone’s fine. It happened more than half my lifetime ago.

On her father, Bob Geldof: I’m proud of my dad – he kept everyone on board while working his ass off. He’s outstanding. Our family has been through… stuff. Like everyone’s. But we’ve come out of it in a good way – that strength of character is testimony to him.’

On her style: ‘My friends Ashley [Williams, the designer] and stylist Fran Burns and I have a style that we call funky offish. You know, something a bit official, but also funky – like how people say smart casual.’

On her music: ‘It’s easy for me to write dark lyrics,’ … ‘I find it easier to be more expressive when I’m sad.’

On her boyfriend George Barnett: ‘We went to karaoke and he sang Backstreet Boys. I was like, you’re the one for me! That was about three years ago. He’s wonderful. He’s the best. I wasn’t interested in boyfriends, I had [my best friend] Ashley, she was like my boyfriend, but he’s so great.’

Full interview appears in the August issue of ELLE UK, on sale Wednesday 3 July 2013. Also available as a digital edition. 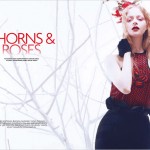 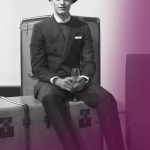