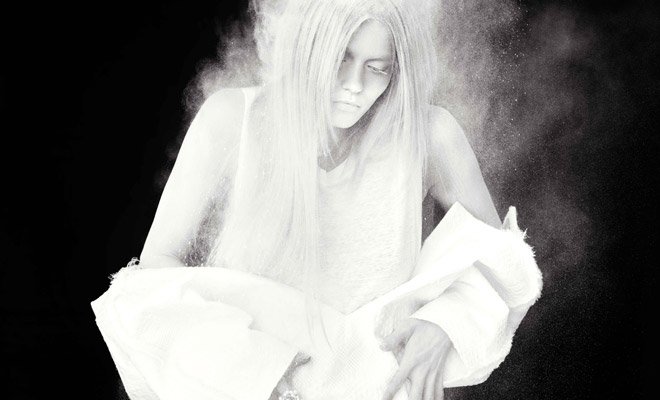 Supermodel and actress Abbey Lee takes the cover story of Flaunt Magazine‘s latest edition lensed by fashion photographer Maurizio Bavutti at Artlist Paris with art direction from James Timmins. For the session Australian stunner was styled by Ada Kokosar (Artlist Paris) in pieces from the likes of Alberta Ferretti, Hermès, The Row, MOE Aliona Kononov, Hugo Boss, Louis Vuitton, and Chanel. Hair styling is courtesy of Adir Abergel at Starworks Artists, with makeup by Rachel Goodwin at The Magnet Agency.

“Firstly, my attraction to acting is not something I particularly chose. It sort of chose me in a sense. Sounds very cliché, but the process feels too natural to be something I’m not meant to be doing. Obstacles? I’m still working those out. So far, at this point in my career, I don’t have any films out yet [three, in addition to Mad Max: Fury Road, on the way, including: Ruben Guthrie, The Neon Demon, and Gods of Egypt]. My fashion reputation doesn’t matter—in the film industry, no one knows who I am—so I can’t transfer that over and use that as a tool to get me in, because it doesn’t work. So trust from others I can pull through is an obstacle. People put a lot into a film and to pick someone who’s relatively unknown is a leap of faith.” – Abbey Lee about her transition from modeling to acting.