Carrying a bag labeled with actor Andrew Garfield’s name on it from their shared stylist’s office: “See, I never talk about this stuff for this exact reason—because it’s all so speculative and baseless. Once you start responding—once you’re like, ‘No, that’s not true’—then they’re like, ‘Well, if we push enough, we’ll get a comment, so let’s see what else we can make up.’ I understand the interest in it completely, because I’ve had it, too. But it’s so special to me that it never feels good to talk about, so I just continually don’t talk about it.”

Admitting she could have flipped the bag around to avoid speculation:  “When I picked up the bag, I was like, ‘This is kind of funny if there are any [paparazzi] out there.’ There’s probably some rebelliousness that comes out in me after all these stories and people texting you for weeks about something that, for the most part, is not true. But even when it’s false, I would rather just let it be false.”

Her reaction to her phone number and email address being published on WikiLeaks after the Sony Pictures hack:  “Then I did one of the worst things ever, which was react really quickly. I was getting all these emails and texts from people I didn’t know—‘Hi, I’m Joe from the U.K. I like your movies’—and I was so overwhelmed that I went to my inbox and I deleted all my emails. In about a 30-second span, I hit ‘Select All’ and ‘Delete Forever,’ and thousands of emails, like six years of emails, are now gone forever. I was just so freaked out that someone was in there…It was horrible. I cried for like an hour. Most of the emails I’m mourning I can still talk to the person and get them back. But there’s others where the person is actually gone. It really sucks.“

Working with Woody Allen (in films such as Magic in the Moonlight and Irrational Man):  “It’s terrifying. He doesn’t do table reads or any rehearsal. You can’t even ask questions about your character, because he’ll be like: ‘You know this is a movie, right?’”

Not preparing an Oscar speech when she was nominated for her role in Birdman:  “Are you out of your mind? Are you actually insane? Patricia Arquette had that thing locked up!”

Growing up with anxiety and suffering panic attacks:  “It was really bad. The first time I had a panic attack I was sitting in my friend’s house, and I thought the house was burning down. I called my mom and she brought me home, and for the next three years it just would not stop. I would go to the nurse at lunch most days and just wring my hands. I would ask my mom to tell me exactly how the day was going to be, then ask again 30 seconds later. I just needed to know that no one was going to die and nothing was going to change.”

How acting helped alleviate her anxiety:  “There’s something about the immediacy of acting. You can’t afford to think about a million other things. You have to think about the task at hand. Acting forces me to sort of be like a Zen master: What is happening right in this moment?”

Reaching a milestone in her acting career:  “There’s this insane thing that happens where you get to a point where you start not just doing things because you’re lucky to have gotten the job, but you actually start making choices. ”

How she chooses which roles she takes:  “But recently I’m starting to enjoy having experiences that I wouldn’t allow myself to have in real life—like Sally onstage, and the kind of mental breakdown she goes through. To do that in front of an audience was super liberating. I’m interested in things that are really scary and ambitious lately. Obviously Birdman was like that. And then doing the play, I was like, ‘This feels like it could totally go wrong every single day.’ And something about that feels vital. Is that a stupid thing to say?”

Passing on the all-female Ghostbusters movie : “The script was really funny. It just didn’t feel like the right time for me. A franchise is a big commitment—it’s a whole thing. I think maybe I need a minute before I dive back into that water.”

Playing a villain in the future: “That would be amazing. I would love that.” 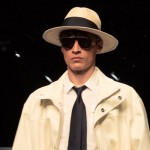