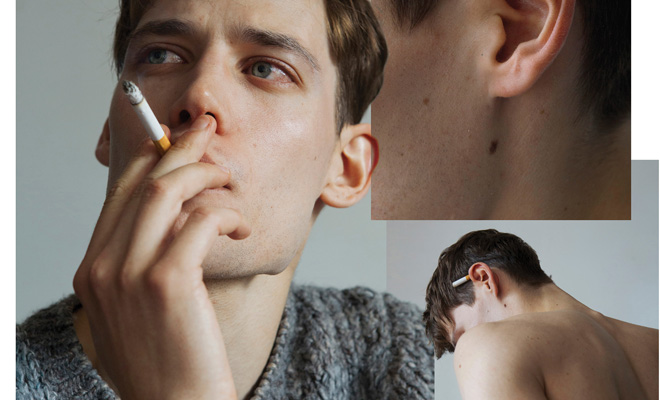 SARAH WALDRON Covers The Rise of Cigarettes for D’SCENE Magazine

SARAH WALDRON Covers The Rise of Cigarettes for D’SCENE Magazine When D’SCENE magazine‘s print edition was first launched little over a year ago, we had our first real experience with angry emails. It came for a very peculiar reason, top model Jamie Wise was smoking a cigarette on the cover photographed in LA by Elias Tahan. As a non-smoker myself who’s quite firmly opposed to smoking, seeing the image as a tobacco promotion never came to mind. Nevertheless around 20 angry emails ended up in our inbox (majority from California), including a few from our fans who we have sadly disappointed. For us the image was simply timeless and deserved a cover, still does.

Not to say more, the person best to talk about it is the talented writer  SARAH WALDRON who covers the rise of cigarettes in pop culture and weighs up the price of looking smoking hot!

The article is published in the summer edition of D’SCENE Magazine. Read it in full after the jump:

There’s is a very satisfying sound that can only be made when lighting a cigarette. It’s after the click of the lighter, the flare of the flame. When the burning paper, the sudden inhalation of air and spark of light come together to make one tap of ash.

It’s the sound of the first drag. It is so quiet that it can only be heard by the smoker. It cannot be replicated.

If it sounds sexy, that’s probably because it is. And if it sounds dangerous, that’s definitely because it is. As a fairly recent non-smoker, I have to stop myself from running barefoot to the corner shop, right now, and picking up a box of Amber Leaf. As Father Ted Crilly would say (and you really have no excuse for never having heard of or watched this vintage British Channel 4 sitcom): Lovely Fags. Beautiful cigarettes. I miss you so.

We’ve all seen the images. James Dean and Marlon Brando, teen dreams with sneaky packs of smokes rolled up in the sleeves of their white t-shirts. Uma Thurman in Pulp Fiction, all badass black bob and Chanel Rouge Noir, lying in bed, staring at us – dead centre – from the movie poster. Imagine only if all of those scripts could predict even the rise of portable vaporizers!

And we’ve seen it in real life too. The bad girls, smoking out the art room window. Always the bad girls. We want to be like them. We want to be transgressive, cool. So we smoke. It’s simple psychology. It’s all a trick.

It should come as no surprise, really, that it was a member of the Freud family who made smoking a cool thing for women to do. During World War One, Edward Bernays was part of a team that created a highly successful propaganda campaign for the American war effort. This led him to thinking about how to apply that kind of thinking towards things that don’t kill you immediately, like cars and cigarettes. And clothes, of course.

He set up an office in New York. Not being totally into the idea of calling himself a propagandist, he called himself a public relations officer. And so, history begins.

Bernays used Freud’s writings to shape the mindset of a crowd, theorising that they would irrationally link inanimate objects to their deepest desires and feelings. Why? Because people are stupid, and we can be incredibly easily led.

This man felt that people often made foolish decisions en masse, and that we needed to be guided by benevolent elders. This all sounds quite nice and cuddly, but when you factor in that Bernays fancied himself as one of the aforementioned benevolent elders, and started his career quite literally working for death and destruction, the ‘enlightened despot’ schtick doesn’t stick.

Before Bernays’ heyday in the 1920s, women didn’t smoke in public. It was taboo because, according to uncle Sigmund, the cigarette bears a passing resemblance to a (small, oddly-scented, flammable) penis. Good girls don’t go puffing on phalluses in public – or at least they didn’t back then. Now, it’s anyone’s penis to puff.

Bernays paid a group of women to smoke at a parade, calling cigarettes ‘torches of freedom’. Torches of freedom. Such a great slogan. No wonder he was the father of PR. He reasoned, not incorrectly, that by putting these things into the hands of young, successful, emancipated women, that other women would associate smoking with being young, being rich, being free. It was intoxicating – quite literally, as a novice smoker can get pretty dizzy after a few drags. From then on, ‘torches of freedom’, less popularly known as ‘cancer in a tube’, became a symbol of female emancipation. Women – flappers, film stars, next door neighbours – started puffing en masse. It was fashionable. And so the fashion industry took note. By Bernays’ logic, if people associated smoking with a sense of inherent cool, then people would associate fashion with being cool after several seconds staring at a fashion plate where the model has a Gauloise hanging from her bottom lip. Historically, fashion doesn’t glamourise smoking – smoking glamourises fashion.

And yet. I have a picture in my mind, a snapshot of my grandfather. A young man like James Dean, a box of cigarettes rolled up in his white t-shirt sleeve. It’s the furthest thing from the picture I have in my memory, of a man old before his time, gasping for air through a nebuliser, unable to leave the house for more than a few minutes. And I can see my grandmother comatose in a hospital bed, the right side of her face collapsing, her arteries hardened from decades of abuse. She quit too late.

And I have an image of myself happily smoking in bars with friends or flirting with strangers in chilly beer gardens, making full and flagrant use of the cigarette as penis metaphor (in a subtle way, let’s not go too mad). But, more recently, I can see myself sitting on a plastic chair, in a small examination room plastered with pictures of healthy pink bronchi, explaining to a doctor that the right side of my chest gurgles when I take a deep breath, and I don’t quite know why.

Fashion trades on images. But images are static moments in time. They are immutable. A human life has a timeline. It has a beginning and an end and, unlike a photograph, a life is worth more than the paper it is printed on. It must be. Still, I can’t but think that fashion doesn’t kill people;smoking does. We should blame the bad girls, blame Freud, or blame ourselves. In the end, a smoking related disease isn’t just faulty genetics or faulty logic – it’s us. And we thought we were so cool.